Yesterday we completed the last major hardscape additions to the flower garden. In addition to building a rose arbor, hubby used scrap wood to build a trellis.  We made sure to brace the trellis against a sturdy piece of wood so it doesn’t take off like a sail on a windy day. The slats on the trellis are far enough apart that the wind won’t knock it down right now it has plenty of room for the wind’s energy to pass through. Once my Blaze climber gets going, though, it will get heavy, and so we braced the back.

Hubby constructed the rose arbor that you see from scrap wood and a few leftover fence posts we had behind the garden shed.  He used my dad’s table saw and sliced two round fence posts in half, using each for the four corners of the trellis. The slats are constructed from pressure-treated 4 x 8 sections of pine that he also cut to size.  We used a pickaxe to dig through the hard clay soil, then a post-hole digger to widen the posts. He didn’t nail the pieces together first but assembled the structure in place to make it easier to move into position. We assembled it without nails on the floor of the porch to check the evenness of the slats, then marked the spots using a pencil. 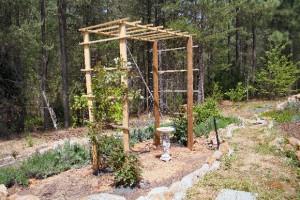 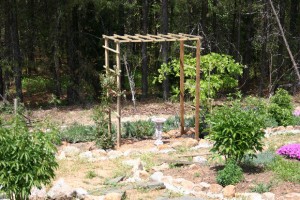 I’m delighted with the arbor and it creates the perfect focal point in the garden.  You can enter the garden on one of two pathways; a utility pathway at the far end, closest to the garage and where all the gardening tools are stored, or through the metal arbor where morning glories twine and bloom in a few weeks.  But the eye is drawn right into the garden to the rose arbor, making it a destination.  My little birdbath/butterfly bath, a resin cast with the three graces from Greek mythology around the base, is underneath. On the left if the second of two Blaze climbing roses I have in the garden; on the right, the new pink one without a name that John bought me for my birthday at Lowe’s.  Clustered around the foot of the arbor on the diagnonal are two red miniature rose bushes we rescued from the discount rack at Lowe’s in March – Valentine’s Day leftovers, I guess, really ugly things past bloom. They love it in the garden and are thriving and both have little perfect red buds on them today.  To the right of the arbor is my birthday present rose from 2008, the salmon pink hybrid tea rose called Sonia, and beyond that, a Bonica floribunda.  The Sonia struggles, but Bonica loves it out there.

I’m amazed at how the roses are thriving despite the heavy clay soil. Considering we had to use a pickaxe to dig those fence posts, they must be incredibly tough plants.

The entire rose garden is grown organically. I have to – it sits almost on top of my water well, where water from the house and our drinking water flows deep under the ground. I won’t risk pesticides or chemicals there.  Japanese beetles are the main problem starting in June. I use a Neem-based spray oil concentrate to fight them and hope for the best each year.  The deer haven’t troubled them so far (knock wood).  I fertilize them using a rich compost we get from the local paper mill, and pine chip mulch applied in a thick layer cuts down the watering.  Watering? That’s whatever God provides in the form of rain.  We do no supplemental watering in this part of the garden unless we’re in a deep drought.

I can see the rose arbor from my office windows. As I’m typing this, a flock of goldfinches alighs on the top of the trellis. They seem to enjoy perching there.  I hope insect eaters – particularly those with an affinity for Japanese beetles – enjoy the perch. And soon!