The peach trees are just starting to bud, but we had another freeze last night. I woke up this morning and it was 28 degrees. The outdoor cats’ water bowl was frozen solid.  It was like a big block of ice. They were inside the cat house all snuggled down into their blankets.  Whitey has decided that the warmest spot is the top of the new mulch pile, so he dug out a little terrace for himself and I can see him from my office, sunning himself atop the steamy pile of mulch in the bright sunshine.

But it’s cold. None of the fruit trees are budding. The crocus and snowdrops are up, and the daffodils too, but at this time last year nearly all the daffodils in the orchard were blooming, and this year the ones near the top of the slope where it is warmest are blooming, but the ones near the cooler bottom portion where the plum and apricot trees are planted are barely even showing through the grass.

I’ve heard spring peepers singing in the woods on warm nights but they’ve been silent lately. Yesterday we even had snow!

Weather in my part of south central Virginia is very challenging. I’m used to gardening on Long Island, where the waters surrounding the island mitigate big swings in temperature somewhat. On Long Island, if your nighttime temperature is in the 30s, the daytime temperature will be in the 30s or 40s. Here in Virginia, it can go down into the 20s at night and soar up to the 60s during the day.

The seasons are drastically different here from year to year, too.  Some years, it is so warm in March that like last year, the peach trees bloom. Other years (like this year) I feel like it will never get warm enough to plant anything.

Well, at least this is giving us enough time for the chores.  We are pulling up all the mulch around the house and using it like compost, spreading it on the areas on the front lawn where the quartz outcroppings show through and there’s barely enough soil to support moss let alone grass.  Between the crumbling compost that hid under the decaying wood chips and the cat “fertilizer” the boys thoughtfully provided, the lawn should do a bit better this year.

All of the cats are doing remarkably well. We now have six…funny how five years ago when my old black cat died I never dreamed I would end up being Cat Mom to six!  Pierre turns five this year and I feel like, “Where did the time go?”  Pierre remains Master of the House and King Cat. He is the largest of all the boys (not just fat) and enjoys snoozing in our master bedroom closet, alternating between my closet shelf and my husband’s. 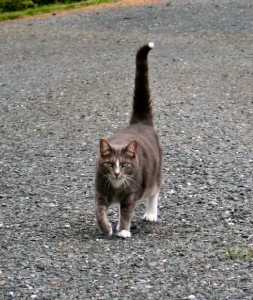 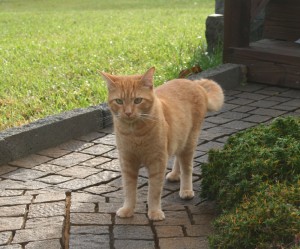 Raz, our orange feline leukemia positive baby, is doing fine and befriends every cat who comes into the house. Genghis Kahn is our black cat and he is still slightly crazy. The vet thought he had been in the wild too long, and he was indeed semi feral when we found him. Now he is my cuddle boy, but he has these bouts of craziness that make him turn into a maniac at random intervals during the day.  His brother, Neko, lives at my neighbor’s house and is her little boy’s cat and sometimes Neko stops by to visit.  We call into the house, “Genghis! Your brother is here!” and the two stare and chortle at each other through the window. You wonder if they recognize each other. I think so, but who knows? 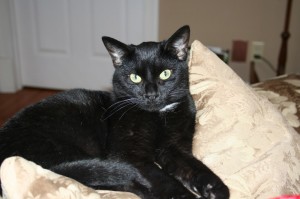 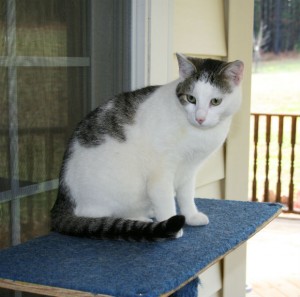 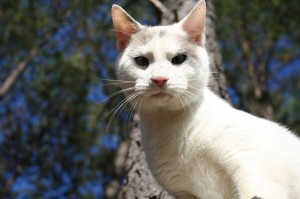 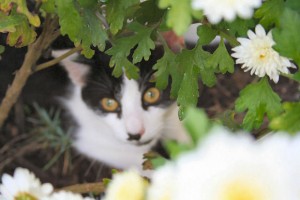 Then there are the kittens…who are no longer kittens, but we still call them that: Groucho, Whitey, Shy Boy. How I love these snuggly balls of fur!  They are amazingly sweet cats.

Groucho loves to come indoors and play for a while with the indoor cat toys. He and Genghis have rousing games of soccer with their orange stuffed mouse. Groucho loves to climb trees, and we joke that he practices his tree climbing skills.

His brother Shy Boy chases him around the front yard, and they chase each other up the pine trees, down the pine trees, up and down like they’re doing exercise drills. Shy Boy is now nicknamed Lazy Boy because nothing – and I mean nothing – gets him out of his cat bed except food.  He ended up being the largest of the three outdoor cats, and he would like nothing better than to be a lap cat or a bed warmer for someone, but he contents himself with snoozing on the cat bed and the dog bed outside.

Lastly, there is Whitey, he of the beautiful sapphire eyes and constant pur. You just say his name – “Whitey! Hey, White Cat!” and he answers not with a meow, but a purrrrrrrr. Whitey is an amazing hunter. He catches mice and even caught a squirrel. I hope that he keeps them away from the peach trees this year…IF the peach trees ever bloom and the bees don their sweaters to keep warm and pollinate the fruit.