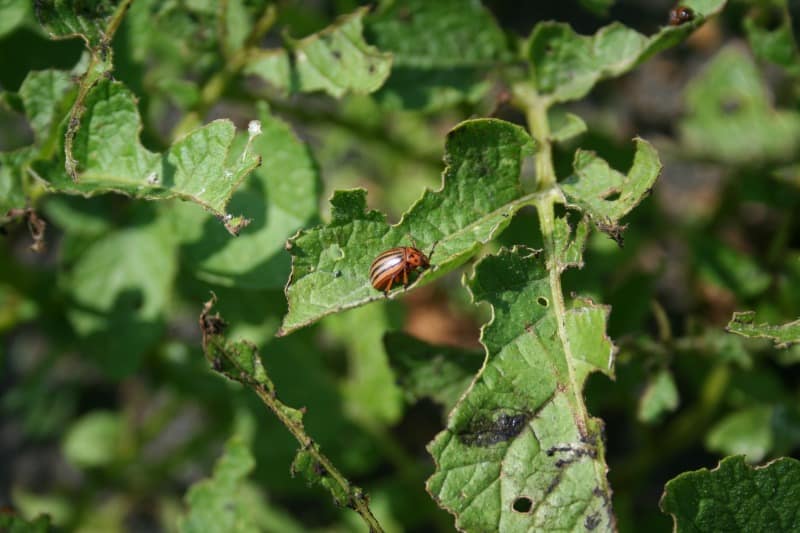 I have a confession to make.

Not just any bug. This one. The Colorado potato beetle.

I’m so obsessed with ridding my garden of this one pest that I actually dreamed last night I was ridding the potatoes of them. Only in my dream, instead of the dish soap and water mix that I use to wage war against them, I accidentally sprayed my potatoes with Round Up.

Can you tell I’m obsessed?

Let me explain why.

The Colorado potato beetle and I met two years ago. At first, I thought it was a cute little thing. I mean, look at the nifty racing stripes on its back and the pretty bright yellow eggs! What could be wrong with a little beetle?

The larvae weren’t so cute. They kind of looked like wriggly red snot balls munching their way over the stems and leaves of my potato plants. At first I just watched them go by. I’m an organic gardener as much as I can be; I mostly let nature take care of herself, and take care of my plants, with as minimal fuss as I can. I watched as the bluebirds swooped into the garden and carried off the hapless potato beetle larvae to their doom and the delight of the bluebird chicks waiting for their meal.

But even the bluebirds couldn’t keep up with the incessant spawning from the once-adorable striped beetles. Soon the potatoes were crawling with the snot bugs as I called the larvae…and then the eggplant had them…and then the tomatoes.

Okay, that was the last straw. Not the tomatoes. Never the tomatoes! Off with their heads!

I read up online about the Colorado potato beetle and discovered that to my surprise, it’s a native to the United States. It feasts on plants of the nightshade family, which we do have in abundance in some of the fields around here, including my own fruit tree orchard.

Like any smart critter, however, it’s discovered that the imported potato plant is far tastier than weeds, and thus it’s endless march through my potato beds.

It weakens the plants by eating through the leaves. An adult can eat a plant in about a day; the larvae, once hatched, decimate it in a day or two. Without leaves, the plant can’t make any energy and it suffers as a result.

Last year, I tried two tricks: Sevin, a commercial pesticide, and soapy water, a trick learned from my dad’s Uncle Louie who taught me to rid his corn plants of Japanese beetles by flicking them into an empty coffee can with a bit of kerosene in it. My grandparents generation used kerosene for everything. I prefer a teaspoon of liquid dish soap in one to two cups of water for that dastardly deed.

I waited until the bluebirds fledged before using Sevin dust, and felt dreadfully guilty afterwards. It didn’t seem to do much, either. It slowed the onslaught, but didn’t stop it completely. I flicked adult beetles into my soapy water jar but the larvae kept coming. We didn’t harvest a single potato last year.

This year, I decided that things would be different. I’d read up on chemicals to combat the Colorado potato beetle and discovered that they’ve become immune to most of them; the survivors just keep getting stronger, and so far, no good pesticide is available for the home garden to combat them. And I’m not sure there’s any “good pesticide”, just ones that won’t kill you outright, so I’d prefer not to use them at all if I can avoid it.

I was left with one choice: soapy water.

I decided to attack with a combination of ferocity and love.

I filled my container with one squirt of Palmolive dish soap and a lot of water until it was about one-third full of liquid. Armed only with an old metal spoon, I began flicking larvae of all sizes into the soap. This year, adults, newly hatched larvae, and nasty pink larvae or all sizes went into the soapy water. I used the spoon, dipped into soapy water, to scrape eggs off the leaves.

I’m pleased to say that by doing this task every two days, I’ve managed to cut the beetles down tremendously! I saved many of the potato plants and the tomatoes, too, all without using chemicals.

It takes me about an hour to pick through all of my plants, and it’s disgusting work, but it’s working without chemicals, and for me, that’s a major plus.

So for all of you struggling with the Colorado potato beetle, although you may think it’s gross, the soapy water death is actually both kind and effective. It’s kind to the environment; I just pour out the corpses and dirty water in the woods without pouring chemicals into my garden. It’s kinder to the bugs, for I imagine a gentle drowning death compared to inhaling poison is easier. I’m not sure it is, since I can’t ask the insects, but I feel it is.  And although more labor intensive for me, I’m sleeping better at night knowing I’m not accidentally poisoning birds or other creatures feeding on the occasional potato bug.

So here is my confession: I’m actually finding that picking potato bugs off plants is a meditative experience. It’s my zen time. It’s quiet time. It’s gross, but it works, and it’s given me an excuse to garden for another hour a day.

Zen and the art of killing potato beetles. Think it will catch on?