It’s just another manic Monday here at Home Garden Joy as I recover from “weekend warrior gardening.” That means I try to tackle every single home and garden tasks in a few hours on Saturday and Sunday…and feel like I need another day off on Monday!

Here’s what I accomplished in the gardens and in our home this weekend. 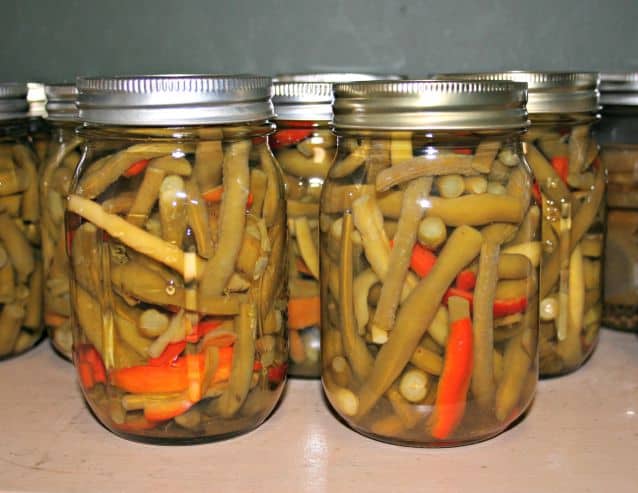 My garden is overflowing with peppers and green beans at this time of year. Canning green beans in the pressure canner is easy, and my husband likes the taste of them, but what to do with all the peppers? We’re still eating our way through peppers from the summer of 2013, canned, pickled and just as tasty now as they were then thanks to the home canning process. I flipped through my copy of the trust Ball Complete Book of Home Canning, a book that I consider to be the best on the topic, and found this recipe for Dilled Green Beans. I had all the ingredients growing in the garden or picked in the spring and stored in the pantry, so I fired up the hot water bath canner and set to work. The resulting bean salad should be spiced and ready to try in a few weeks. For now, six pretty jars await in my pantry with the other home canned goods. 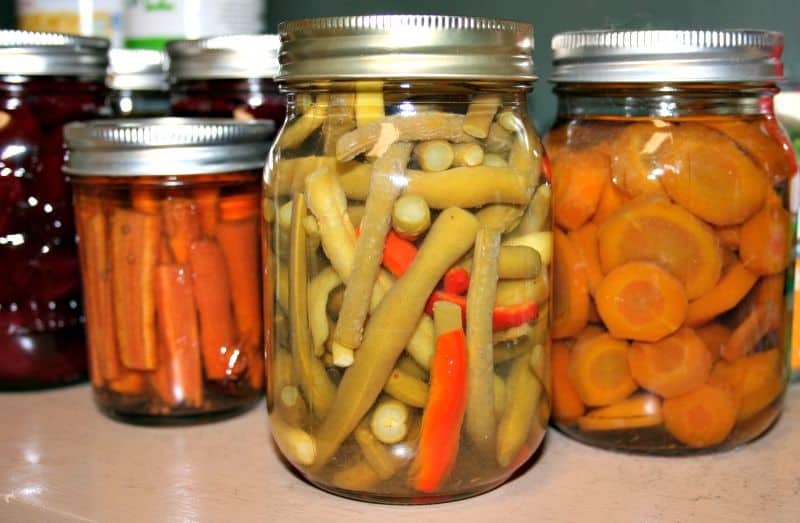 I love canning vegetables and fruit from the garden. It lets me indulge my love of home cooking while creating a practical addition to the pantry.

In addition to canning some garden produce, I cut the lawn in the vegetable garden and admired the weeds. Okay, I did do a bit of weeding, but mostly around the foundation landscape. We are installing an aerial television antenna and needed the place where the satellite TV company had originally drilled a hole through the exterior wall so that we could run our new wire into the house. We tested the television antenna and made sure it worked. I bought a Lava HD 2605 television antenna and so far, so good. We don’t have it mounted outside the house yet, but even inside the house we were able to pick up many television broadcast stations with crystal clarity. I am so glad we got rid of satellite television. I plan to write more about our decision to simplify and modify our entertainment choices. Choosing to limit the amount of television we watch and focus on quality, commercial-free entertainment such as “clean” British and American comedies and dramas has improved my peace of mind so much. The TV antenna is to pick up news stations – and of course, FOOTBALL.  It’s almost September. I love Sunday afternoon NFL football!

This is the Lava TV antenna and I recommend it (so far!).

This weekend, I also tested this gizmo. It is called the CobraHead, and I was sent a free tool to try in the garden and review here on the blog. I will review my experiences with the CobraHead weeding tool later this week and tell you all about it.  Here’s me with my new CobraHead tool in the garden: 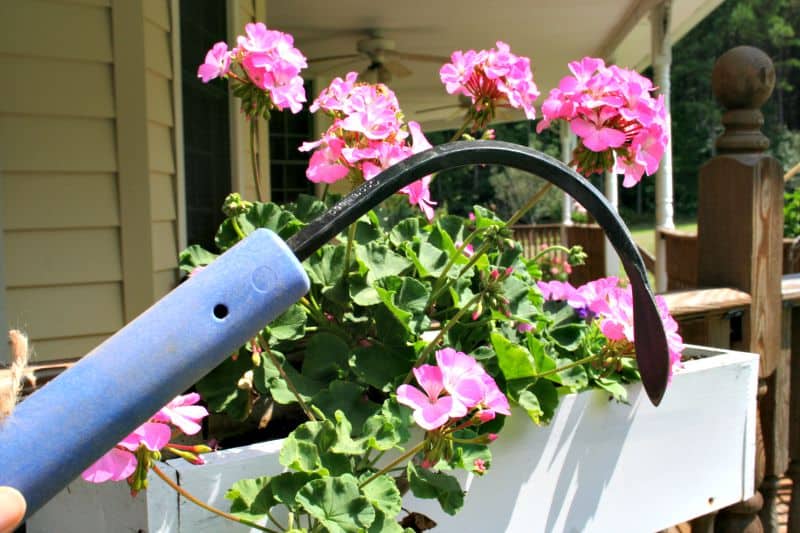 The CobraHead weeding tool…great design. Reviewing it for you this week! 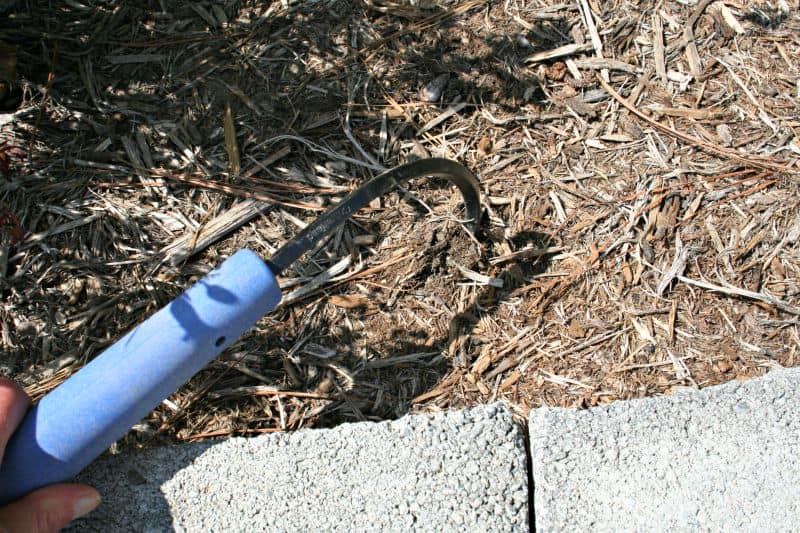 I will review the CobraHead tool this week.

The weekend wasn’t all work and no play. I managed to download the classic Star Trek series from Netflix and happily watched Captain Kirk, Mr. Spock and Dr. McCoy take on the salt alien and enjoy Shore Leave. It brought back many happy memories of sitting with my dad in our basement playroom watching the old black and white television and eating Mr. Salty pretzels straight from the box.

Sunday night found me flummoxed by a bland chicken breast defrosting in the fridge and no clue what to make. I invented a chicken recipe on the spot, which we ate so fast because it tasted so good that I didn’t even get a chance to photograph it. Alas. That recipe will appear on Friday, when I will bring back Foodie Friday and a recipe each week.

Lastly, I indulged my curiosity about those scented wax melt cubes and bought two packages for a whopping 97 cents each at Wal-Mart (yeah, I know…”hey, big spender!”).  I don’t own a wax melt device yet, so I invented a little solar wax melt device that’s doing the trick quite nicely.  I love scented candles, but with the cats around, I’m always worried about one of them knocking over a candle and starting a fire. With the scented wax melt, I don’t have to worry about fires, and so far the cats aren’t interested in them. I placed them on very high cabinets so hopefully they will be out of feline reach. 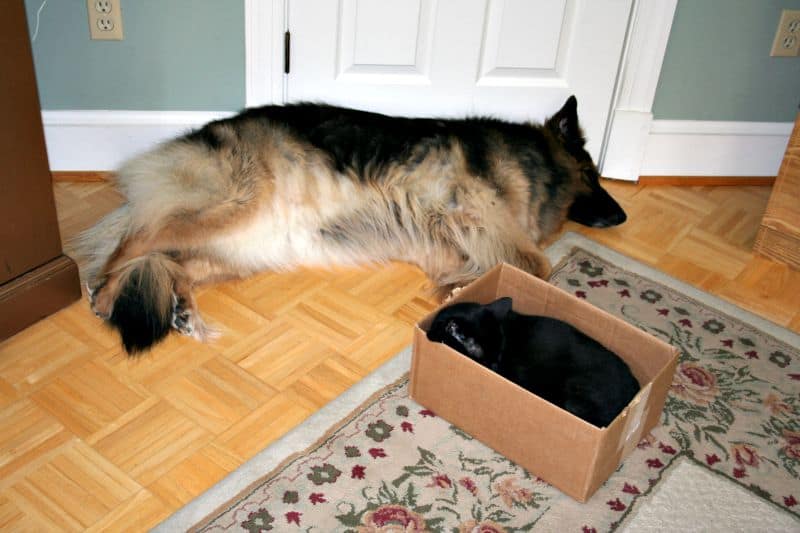 Two of the menagerie here: Shadow the dog and Genghis Khan, the furry editor, in his work cubicle.

So there you have it…this weekend warrior accomplished a few things this weekend and felt renewed for the week ahead. I’ve got so many nice things planned for Home Garden Joy and a few surprises for my readers, too. So Happy Monday, and have a wonderful week!