Low cholesterol, low sodium sauerbraten….can it be done? It was a challenge I was prepared to tackle, especially since we haven’t had our German comfort food fix in over two years. My husband bought a nice lean piece of bottom round roast and a tub of fat-free sour cream and asked, “Can you try it?”

I did, and it was delicious!

Sauerbraten is German comfort food. It’s pot roast with the richest spicy, sweet, sour gravy imaginable. I make it in the slow cooker (Crock Pot) which saves some time, but it is a labor-intensive meal that’s worth every bite.

The traditional side dishes that accompany sauerbraten include red cabbage, which I made from scratch, and spaetzle. Spaetzle is a type of small dumpling popular in Alsace and southern Germany (where my family comes from) that’s truly delicious. But, like many delicious ethnic foods, it takes time to make, and on a workday, I did not have time to make it from scratch. I substituted noodles instead.

I found “no yolk” noodles which eliminated the cholesterol from the side dishes. No yolk noodles are very light and airy, too, which is good with a heavy meal like sauerbraten. The extra broad no-yolk egg noodles are great with this meal because the broad noodles provide more surface area for the gravy.

The Gravy: Zapping the Cholesterol from Sauerbraten Gravy

Typically, sauerbraten gravy drips with cholesterol and sodium. I guess that’s why it tastes so good! The recipe that I’ve been making for years utilizes the beef broth and apple cider vinegar base from the Crock-Pot and adds sour cream, crushed ginger snap cookies, brown sugar, and flour to the liquid to make a thick, heavy gravy.

To lighten the gravy, I started with a sodium-free base of water and apple cider vinegar. As the meat cooked in the slow cooker, the drippings added taste to the water and cider vinegar. I kept the ginger snaps the same and substituted fat-free sour cream for the full-fat version. I cut the flour by one-third and used the same amount of brown sugar. The result was a light yet extremely tasty gravy that mimicked the original recipe very well. 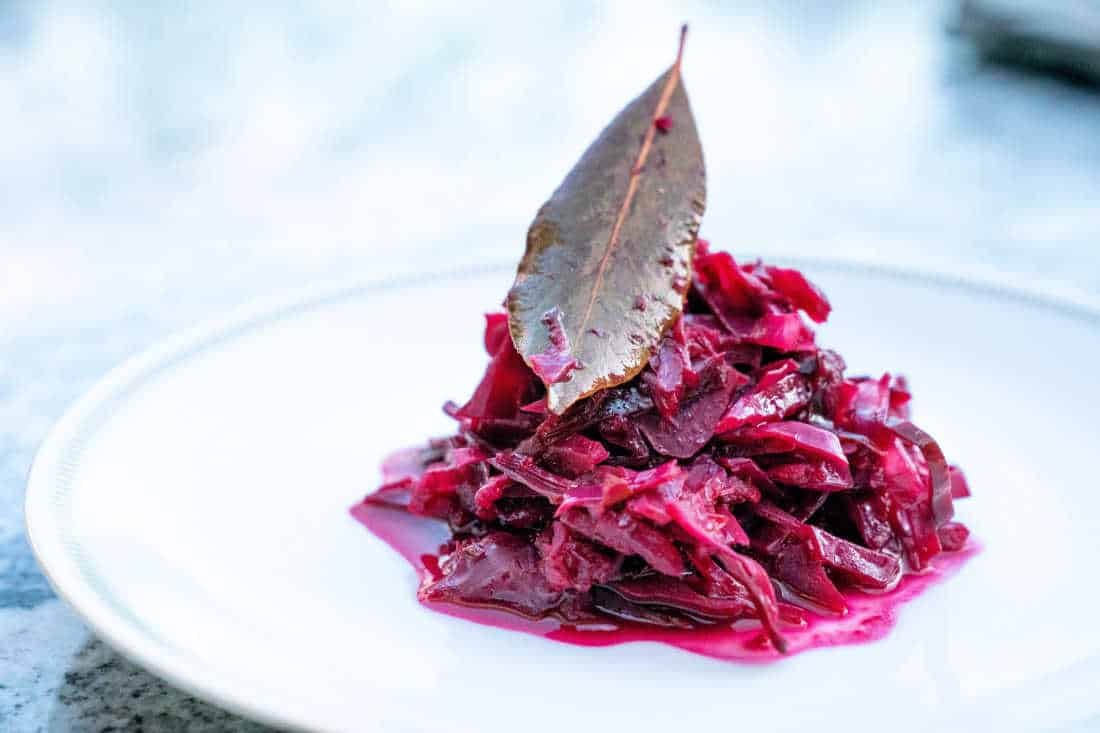 Photo by dimitri.photography on Unsplash

The red cabbage cooked on the stovetop while I worked on the gravy. I sliced red cabbage and half an onion very thin and cooked it in a saucepan. To make the red cabbage from scratch, heat 4 tablespoons of olive oil in the saucepan. Stir in 1 tablespoon of sugar. Then stir in the onion and cook it until translucent. Add the red cabbage. Stir. Add 1/2 cup apple cider vinegar and 1/2 cup red wine or red wine vinegar. Stir, cover, and simmer on low for 10 minutes. Uncover and add 1 cup of water, stirring and covering but leaving the cover slightly ajar to release steam. Simmer for half an hour, stirring frequently and adding more water as needed to prevent sticking. That’s it! It came out delicious.

German comfort food is taken in a healthier direction by reducing the sodium and fat in the gravy. Leave plenty of time to cook the no-yolk egg noodles and the red cabbage (see recipe above) as well as the gravy. Look for ginger snap cookies with the lowest sodium per serving.
Print Recipe Pin Recipe
Prep Time 30 mins
Cook Time 6 hrs
Total Time 6 hrs 30 mins
Servings 4