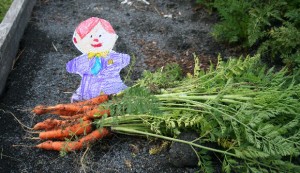 This weekend, I harvested the last of the fall/winter carrots. The little guy in the picture helping me is Flat Stanley.  He’s part of a literacy project from my nephew’s Long Island school. Flat Stanley travels around the world, and when he arrives at his destination, his host family writes about the local area. My nephew (and the other children in his 2nd grade class) colored their Flat Stanley cut outs and mailed them out.  We are supposed to take a photo, write a letter, or enclose pictures with Flat Stanley sharing our part of the world with the class. We debated taking Flat Stanley to the town of Appomattox, which is just about 15 minutes away and the place where the American Civil War ended. There is a museum there, cannons, and a lot of historic stuff, but we realized that 2nd graders probably have not studied the American Civil War.  The boys in the class would like the cannons but the girls wouldn’t care.  So we decided to keep Flat Stanley closer to home and use this as an opportunity to show the children where their food comes from, since they are youngsters growing up in an urban environment.

We created a little booklet about Flat Stanley’s adventures on our ‘farm’ and his visit to the neighbor across the road who raises beef cattle. When I first saw the coloring book character taped to a stick, I thought, “Oh no, this looks like a bad imitation of Mr. Bill.”  That’s the character from the old Saturday Night Live skits.  We had a lot of giggles about Flat Stanley meeting the paper shredder, Flat Stanley meeting the fireplace and all of that, but at the end of the day when we actually sat down to think about it we ended up with a really cute little booklet for the 2nd grade class.  I hope they enjoy it!  Flat Stanley helped me pick carrots, showed the children what Swiss chard looks like, pointed out peaches on a peach tree, and even posed with a neighbor’s black Angus calf.

The carrots were just so-so (although I believe Flat Stanley thought they were tasty.)  I left them in the ground too long. I planted the seeds last fall, and I planted too many, so I’ve been waiting and waiting to pick them since my refrigerator is full and I’m too lazy to blanch and freeze anymore.  But the beets won’t wait, and we have only three of the raised beds in the vegetable garden area made without treated lumber. When we constructed the vegetable garden, we created three of the raised beds with untreated lumber and the rest from treated lumber, thinking that we’d put the root crops in the untreated bed.  Our research showed that for the most part, the modern methods of treating lumber make it safe to use in vegetable gardens, but we didn’t want to take a chance. I have to say that treated or untreated lumber seems to have made absolutely NO difference in how long the wood lasted in the garden.  Several beds needed to have corners repaired this year.  The weight of the soil seems to be pushing out the corners and bowing the wood on the treated and untreated lumber alike. The only difference between the two types of wood is that the untreated lumber is already growing some sort of mushroom, like a log in the forest, but both types of lumber are showing wear and tear faster than we anticipated.  Treated lumber has some kind of chemical applied to the wood which is supposed to make it last longer and be more resistant to moisture and rot. We repaired them using metal brackets screwed over the corner.  John worked the drill while I pushed the wood into place.  We figure we will have to replace the beds every few years, and decided that next year we will begin a rotating schedule of replacement so that the entire group of raised beds is replaced in succession.

So the carrots were so-so, with many of them split, cracked, or with the telltale holes from the carrot fly larvae.  You can eat these but the holes mean more work cutting out the part that the insects got to. Some of the carrots were just old, with a texture like wood pulp, and these I composted almost immediately.  I pulled all the carrots on Saturday morning then sat in a lawn chair and cleaned them outside. I put the tops into the wheelbarrow to make it easier to move them into the compost pile.

We planted the beet seeds in the raised bed where we had the carrots.  A small corner of the bed now has the garlic, and it looks like the dill seeded freely last year as I have several plants growing among the garlic.  The garlic took off, and I have high hopes for it.  It really does pay to purchase good quality starter sets, roots and plants from a nursery. I am growing “Elephant” garlic – the huge heads with big white cloves.  It stores really well and I have stored it in the basement for up to two years.

I’m growing two types of beets this year.  Beet “Detroit Dark Red” is an old favorite and a traditional garden crop.  These are Burpee seeds, and I have excellent luck with them in the garden. The beets are sweet and tasty, cook up well and also can very well when I make pickled beets.  I also planted “Golden” beets, my favorite heirloom.  The beets are golden-apricot color and are just beautiful to look at. I first encountered golden beets in New York City, of all places, at a restaurant called Josephina’s by Lincoln Center.  I worked around the corner from there and my friends and I would go to Josephina’s for special occasions. One of my favorite dishes of all was a golden beet salad.  It consisted of dark green lettuces, with lightly steamed and sliced golden beets on top of the lettuce and a sprinkling of sweet onions and either walnut or pumpkin seeds. A bit of feta cheese and vinegar and oil and it was a feast for a king.  I’m counting down the 60 days to harvest on these beets and I will recreate my Josephina’s salad with fresh beets from the garden!