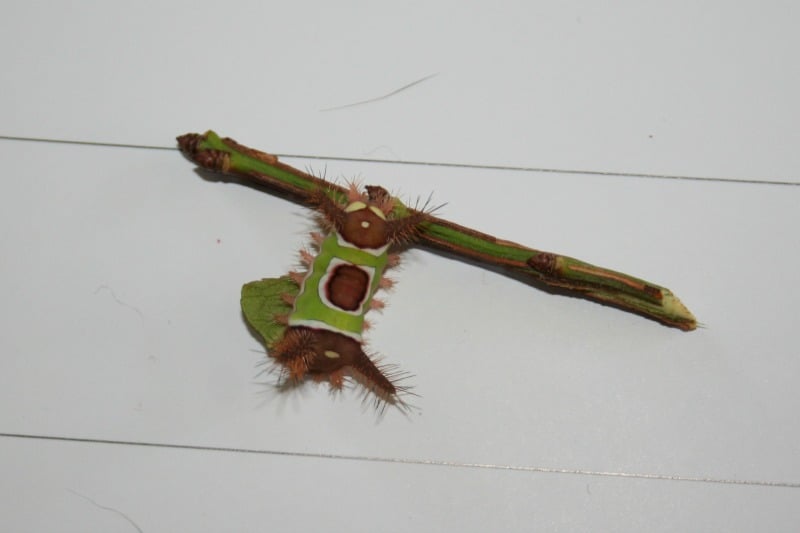 Do you see this ugly critter? It’s called a saddleback caterpillar, and until yesterday, I had no idea it even existed. I was working late when my husband came into the office holding his arm.

“Can you look at this?” he asked me, holding up his forearm and pointing to a red mark the size of a quarter. “I think I just got bit by something.”

It took him a minute to find that exact spot in the garden where he “got bit” by something. He quickly found the culprit clinging to a branch on a burning bush. “I just walked by the bush and my arm brushed against it,” he exclaimed. “It hurt like heck! Felt like a jelly fish sting.”

He brought the twig up to my office with the lumpy caterpillar clinging to it. It didn’t move. I photographed it, my mind reeling. I imaged having to show the photo to the emergency room doctors at the hospital. I quickly searched online for “stinging caterpillars in Virginia” and identified the creature.

Sure enough, the saddleback caterpillar produces a venom through the barbed spines on either end of its lumpy body that deliver a sting similar to jellyfish or bees. The venom can cause allergic reactions in some people, but fortunately, Hubby just had a red mark like a bee sting. We quickly applied tape to the area and ripped it off repeatedly, which also ripped off some of his arm hairs but seemed to do the trick removing the barbed stingers left in his skin. An ice pack and a few minutes later and he was good as new.

All I can think of is how many of these creatures are out there. A friend’s son was weeding her raspberry patch and encountered the puss moth caterpillar, and he had a massive allergic reaction and ended up in the emergency room.  I knew about black widow spiders and copperhead snakes, but stinging caterpillars???

There are more lurking in the garden.  For more, here is an information sheet from the Blue Ridge Poison Center.

Moral of the story: ALWAYS WEAR GLOVES WHEN GARDENING. And pants. And boots. And maybe a helmet, goggles, and astronaut suit…