Well, that’s one way to get rid of moles in the garden…let your cats go after them. Shy Boy caught and killed his first mole today. Moles can be a nuisance in the garden. 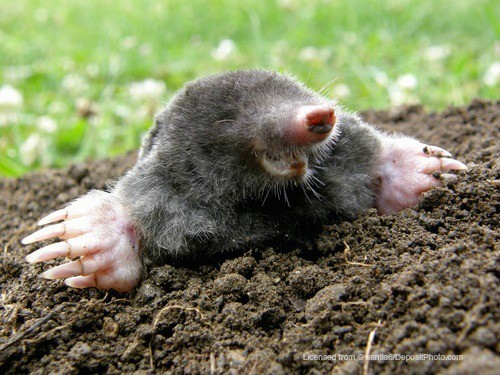 This morning, we noticed that our three outdoor cats – the Marvin brothers, as we call them – were hard at work digging at something in the vegetable garden. Shy Boy was especially busy in the carrot and turnip patch. A little while later, my husband called me out to see his catch; a mole, just like the one in the picture above. He’d dispatched the creature with expertise, and saved my ankle from a nasty turn by pointing out the mole tunnel newly dug under the garden paths to the raised beds.

Moles are generally harmless to your plants, but they are pests. The recommended methods for “controlling” mole populations give me nightmares. Have you seen a mole trap? It’s got to be the cruelest thing in the world. I hate them.

I’m not saying that being killed by a cat is great, but it’s more humane than to be impaled on a metal spike to die a potentially slow, agonizing death.

Okay, back to moles. What are they? What do they do?

Moles are mammals found on every continent except Antarctica and South America. They aren’t particularly fussy about their habitat, and will colonize grassy areas. That’s why they can be such pests in the garden. Most homeowners like their lawns without the telltale miniature volcanoes that signal a mole tunnel entrance.

Moles dig elaborate tunnels. The tunnels aren’t just to get from one place to another, but housing structures that contain birthing chambers, kitchen areas, even bathrooms. I didn’t know that moles were so fastidious.

Moles don’t eat your plants’ roots, but their tunneling can disturb or damage roots. They eat insects, including grubs, worms, and anything else they can find underground. That’s the good part about moles; they’ll help control all those pesky Japanese beetle grubs. Apparently earthworms are a tremendous treat for moles and they will eat as many as they can, so I’m thinking that all my good organic gardening practices have led to some healthy earthworm colonies – which are attracting moles, because we suddenly seem to have a lot of them in recent years.

By the way, moles aren’t blind. That’s a misconception. They can see, according to Facts About Moles, but they see poorly and are color blind.

Get Rid of Moles in the Garden

Since I can’t lend you my cat, and I find mole traps disgusting, how can you get rid of moles in the garden? Here are some suggestions.

I usually leave moles alone in the garden unless they’re just being such a nuisance that to leave them means either my husband or I will turn an ankle in a mole tunnel or hole, or the lawn tractor might tip over if the wheels hit a  mole hill. In that case, people before moles, and it’s time to show our cats where to find their prey.

Moles are fascinating little creatures, and my own personal organic gardening philosophy of “let it be unless it can’t be let” means I tend to leave them alone unless they get too much in my way. But the cats today decided to get rid of moles in the garden for me, for which I am very grateful.