The tomato fruitworm usually affects unripe tomatoes and causes considerable damage. Here’s how to spot these pests, what they are, and organic methods to control them. 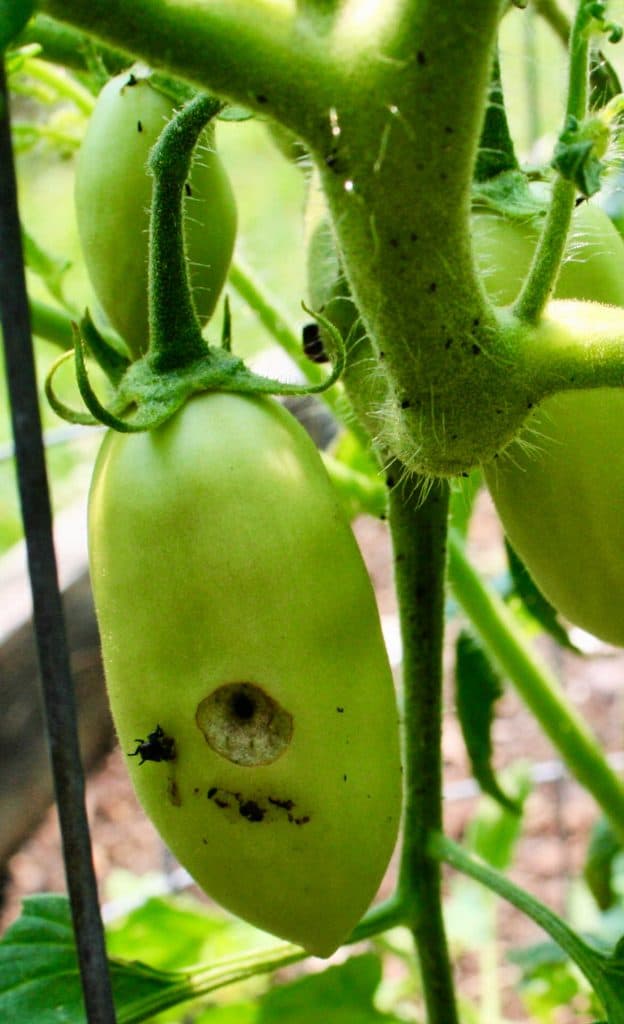 What Is the Tomato Fruitworm?

You’re watering the garden, admiring your lovely tomatoes when suddenly you notice a hole. It looks like a woodpecker started pecking a green tomato or some crazed gardener took a drill to the tomato. Sometimes the hole has a depression in the middle of it or just looks bruised. Others, like the hole in my Roma tomato in this picture, show that something made its way into the tomato. But what?

Welcome to the world of the tomato fruitworm. It’s also called the corn earworm, Helicoverpa zea. It’s typically a late summer pest of corn, which is why I was surprised to find it in my garden now at the start of June. However, we’ve had crazy weather for late spring. Very hot temperatures soaring the mid-90s and a dry spell probably gave the pest an early start.

The tomato fruitworm isn’t fussy about its host plants, although it does love corn. I stopped growing corn both because I had trouble growing sweet corn and thanks to the corn earworm, although I didn’t know it was the same bug. I just knew that every time I pulled back the leaves from a ripe ear of corn, one or two worms fell out.

The larvae are the young of a nondescript brown moth. They take several weeks to mature inside the fruit then drop back to the ground where they burrow several inches into the soil and overwinter. Next year, they hatch into the mature moth, which then looks for other crops to infect.

What Do Tomato Fruitworms Eat?

Obviously tomatoes, but they’ll also eat corn, green beans, lettuce, and, according to the Virginia Cooperative Extension, over 300 host plants. Luckily for me, however, the worms are loners; the parents lay one egg, not a clutch of eggs like the potato beetle which is also attacking my tomato plants this year.

How Do You Get Rid of The Tomato Fruitworm?

You can pick the unripe tomato and discard it in the trash. Unfortunately, you can’t get the worm out and salvage your tomato.

Many beneficial insects such as parasitic wasps eat the eggs and larva, and my garden tends to attract parasitic wasps, so I’m holding out hope that the wasp airforce will arrive and come to my rescue and nature will restore the balance in my garden.

If that fails, Bacillus thuringiensis (Bt), an organic spray made from a natural bacterial predator, can be used. However, for just a few tomatoes and a small garden, no treatment is really necessary.

I have to admit, I’m disappointed that my early tomatoes are showing signs of problems already. I was so excited to see the Roma tomatoes set fruit nice and early. These are the plants I purchased from Westway Garden Center, a new garden center that opened in Pamplin. The owner is so nice! She sold us the plants for just $1 for a four pack because they were long and leggy. They’ve rooted very well and are already bearing tomatoes, with a week or two until harvest, but now this problem came and we probably won’t be able to pick the infected one.

Oh well – win some, lose some. The tomato sauce will just have to wait!