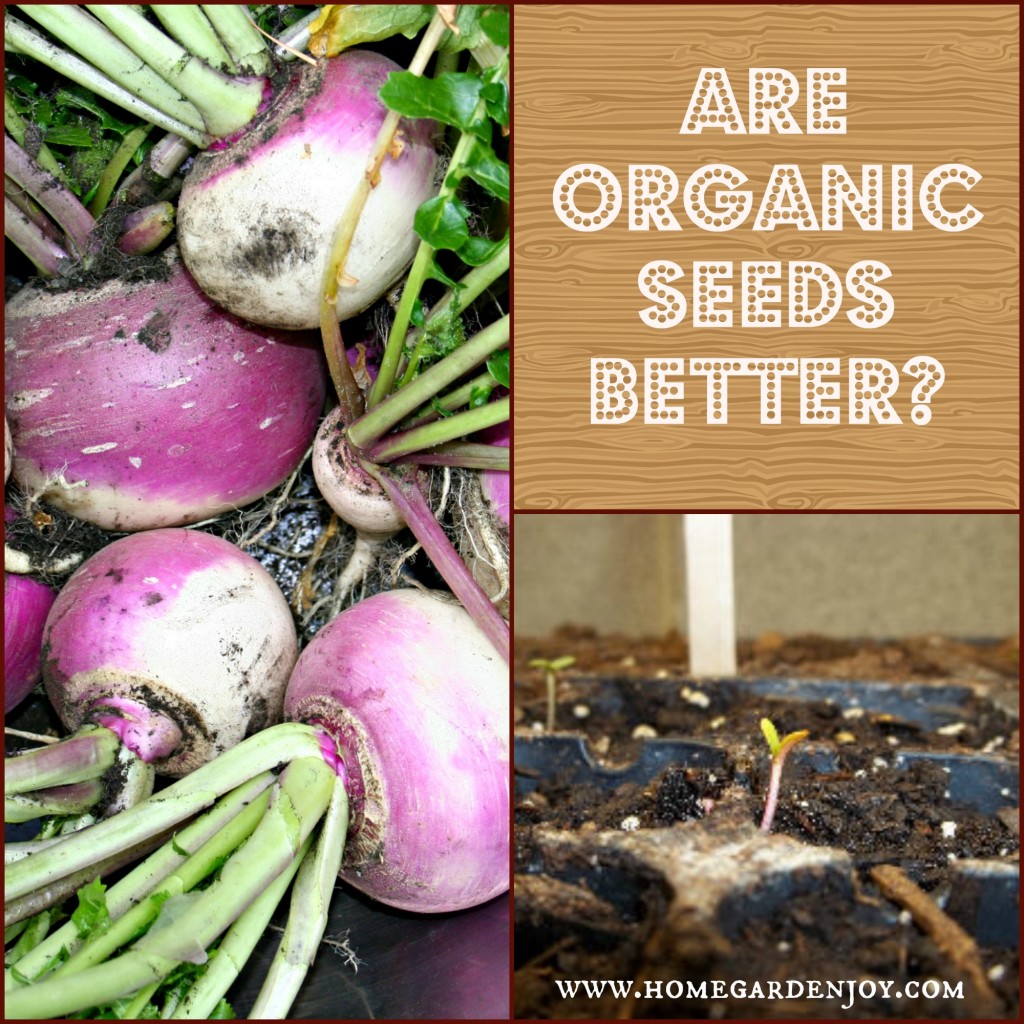 The seed catalog onslaught has begun in my home, and with it, the pitches to buy organic seeds. At the local nursery and garden centers, the racks of organic vegetable and flower seeds now outnumber racks of conventional seed packages. I tend to grow most of my plants using organic gardening methods, mostly because chemicals creep me out. That’s my non-scientific way of saying that I don’t like pouring chemicals onto my crops because I’m never quite sure of the long-term effects on the soil, insects or plants, not to mention my own health. While I will mix a little conventional fertilizer into the soil if plants need it, or spray a bit of Neem oil spray on my roses, I don’t use chemical pesticides the way my dad did in our tiny suburban garden in New York. No, it’s mostly organic around here, although not strictly organic.

So why, then, am I dismayed by the abundance of organic seeds at the garden center? It’s because I’m not sure they’re worth it.

All About Organic Seeds

First, let’s explore what organic garden seeds actually are compared to what many people think they are.

Organic seeds are seeds harvested from parent plants that were grown using organic gardening methods. In order to be promoted and labeled as organic seeds, the Cooperative Extension office states that they must follow protocols established in 2002 for organic seed production. In the United States, the Agricultural Marketing Service, part of the USDA, regulates use of the term organic.

When you see a seed package labeled organic, you can be generally assured that:

And that’s about it.

What!? Aren’t the seeds healthier, better, or able to produce super-duper vegetables, fruits or flowers?

One important reason why people choose to purchase organic garden seeds is to reduce the amount of what is called “upstream pollution”. Upstream pollution refers to the amount of pollution produced as a byproduct of conventional seed production.
In a conventional seed production facility, plants are grown in large fields or greenhouses where chemical fertilizers and pesticides may be used to encourage growth and reproduction.  Large-scale production means the most economical methods are used to grow the most salable crops.

As a result, there may be significant pesticide application or pollution run-off into the soil and local waterways. There may NOT be, which is also important to keep in mind. It depends on the growing operation, the crops produced, the climate, the environment, and even the year.

Most growers that I have met throughout my career in the garden center industry many years ago did their best to conserve nature. The idea that conventional crop production is filled with men that look like the guy on the Monopoly card cackling and rubbing his hands together greedily while he contemplates the chemical chaos he unleashed upon the unsuspecting public is, I’m afraid, a clever construct from those who want you to be afraid of conventional growing practices and the abundant food crops produced as a result of them.

Now don’t get me wrong. I know that too many chemicals hurt the environment. They hurt our bodies, too. I’m not debating that.

I’ve changed my way of thinking over the years from insisting on ‘all organic, all the time’ to ‘evidence based, all the time.’  This change in my way of thinking occurred after I became a Virginia Master Gardener. Because the classes that I took to earn my Master Gardener certification includes classes in conventional gardening methods, I learned about all the research that has gone into the products sold at the stores.  While there are some I wouldn’t use if you paid me to use them, there are many that if used according to the package directions aren’t going to revoke your “I Love Nature” card.

Judicious, prudent use of any chemical products seems to me the safest course of action. As I mentioned before, I grow a mostly-organic garden. I’ll lose some vegetables to bugs without a qualm, but I’ll also sprinkle a little conventional fertilizer around a plant if I need to. It’s a balancing act with me, one that tends to tip to the side of organics most of the time but that may occasionally tip into the conventional side when warranted.

So to answer my original question: Are organic seeds better? Are they worth the additional money?

I hope that this frank discussion of organic seeds has helped you consider the pros and cons of organic versus conventional seeds. Let me know via the Comments box whether or not you are choosing to grow organic seeds this year, and if so, why.