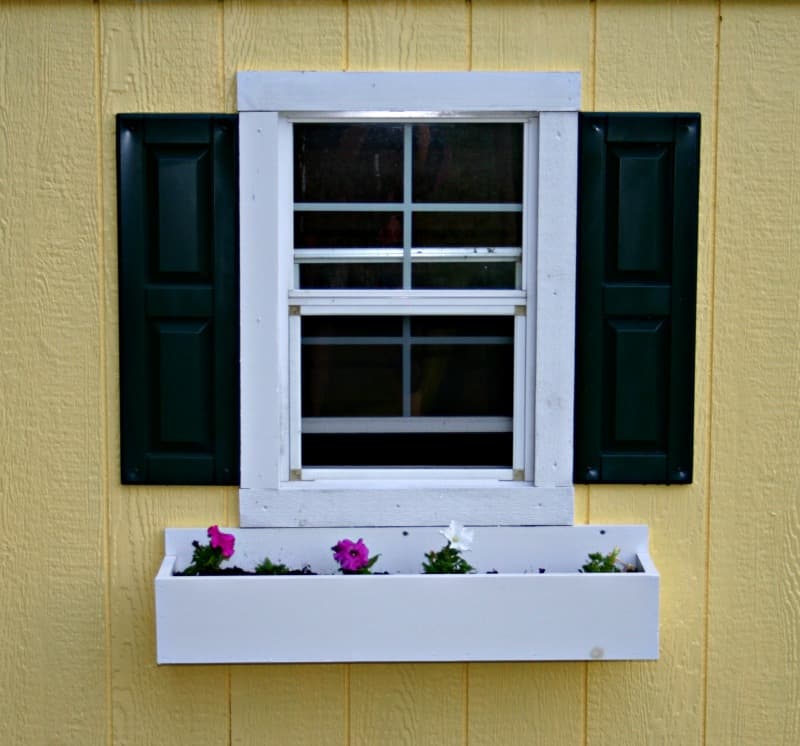 Do you remember those bumper stickers in the 1970s that proclaimed, “I found it!” Jokes abounded about what people found. They meant something religious, I think, but for me, shouting “I found it!” yesterday meant, “I found a new mulch supplier! Hurray!”

Sometimes, it pays to have connections…as in friends who are fellow Master Gardeners. I knew someone among my circle of plant-crazy friends would know where to find mulch. Not only did my friend Liz recommend Bolt Mulch right here in Farmville, but their prices were better than expected and they delivered a huge truckload on the day that I called them. Hallelujah, I say!

If you don’t understand why mulch is so important in the garden, read my post on the topic: Why Use Mulch? You’ll be a fan of shredded hardwood mulch, I promise.

On to bigger and better things…like rain. We finally got rain after a rather dry April. Here in the foothills of the Appalachians, spring is known as the rainy season. Spring is usually warm days, cool nights, and abundant rainfall. Then we follow this with Japanese beetle season and drought season, otherwise known as June, July and August to the newcomers to the area.

This spring was unusually warm and dry, a bit of an ominous portent of things to come. When I’m out watering the vegetable garden each morning with the garden hose, you know things are bad, since I’d rather be weeding than watering. (I think I have a new slogan: Weeding, Writing and Watering! The three W’s!)

Rainfall pattering on the roof shingles and gurgling through the gutters is one of my favorite sounds. I can practically hear the thirsty plants slurp it up. From my office windows, I can watch the phoebes swoop from their nest on top of the elbow-bend in the gutter pipe and catch insects mid-flight. The male flies to the top of the dogwood, where her perches and flicks his tail in the characteristics up and down motion as his quick eyes assess the orchard.

A flash of feathers and the beat of wings later, he’s shooting low and fast across the grass, snapping an unwary insect up from mid-air into his beak. It’s fascinating to watch. From my rocking chair on the porch, sipping a cup of tea during my afternoon break from client writing work I have watched him catch many insects. He flies to the apple trees where presumably he eats them. Then up and back, wings folding the air under him, he soars to his nest. The excited cheeps that greet him mean lunch has arrived courtesy of Papa Phoebe. 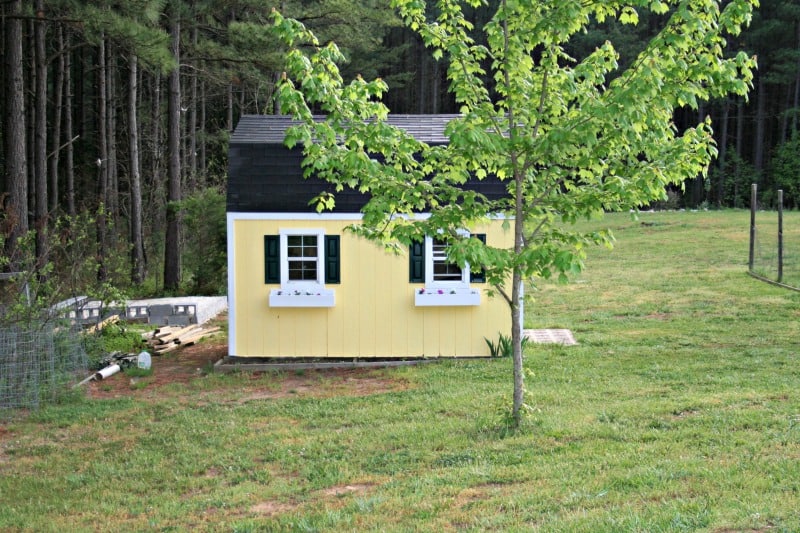 You can see the new compost pile behind the shed.

We are still working on the Palace of Rot as I now call my extreme compost pile. We don’t do anything by halves here at Seven Oaks Farm, as I think you’ve noticed. What started as my simple spoken request to move the compost pile from the wooded area to a spot closer to the vegetable garden has turned into a major construction project.

First, we cleared the area behind and slightly to the right of the garden shed from all the brush and brambles that had grown up over the years. That uncovered a pile of broken, discarded lumber which we’d meant to toss into the cleft in the woods where we toss other wood products to let nature deconstruct them. Off into the woods with the tractor and cart trundling over the rough ground and splintery, termite infested wood jouncing about.

That taken care of, my husband set up a form made from wooden planks. We poured two enormous cement slabs, allowing time for each to dry thoroughly. Now are are facing the slabs with plain yet decorative stones. These get cemented in. 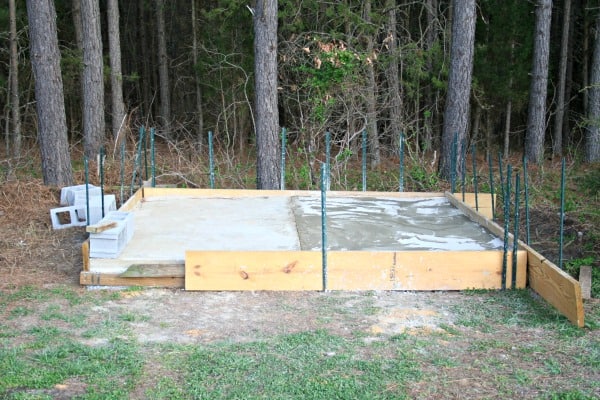 Pouring the slab for the compost pile. The left side is dry. The right side was newly poured in this picture.

Hubby is cutting masonry blocks so that we can allow water to flow out of the compost pile and air to flow back in as needed. Compost needs air, water and heat to enable the microbes in the pile to do their dirty work and break down the cellulose in plant material into the beautiful crumbly stuff that plants love. Most compost piles simply rest on soil, which allows water to drain. Turning the pile adds air into the mix. Because our new compost pile rests on a cement slab, we had to figure out a way for water to drain away or we’d create a nasty compost soup instead of fluffy lovely stuff.

Why did we choose to put down a cement slab first for a compost pile? The problem I had with our woodland compost pile was three-fold. First, it was difficult to access. I had trouble digging out the compost. When I did have a full wheelbarrow of compost, I had to push it uphill to the garden. That’s not good planning on my part. Gravity should always be your friend in the garden.

Next was the location. The location cause the other two problems. The wooded area was out of sight, which is fine, but it was also always in the shade, which kept the pile cold. It took forever to get started and when it did, much of the plant material didn’t break down well.

Lastly, the pile was located at the foot of several pine trees. As the pile grew over the years, it shrank just as rapidly. I have very happy pine trees because their roots have greedily eaten all of the compost near the soil surface. I don’t blame the pines. It’s as if an all-you-can-eat buffet filled with the choicest morsels opened next door, but plant-style.

Now you can understand why we placed a cement slab down first. The slab should, theoretically, keep the trees from getting the best compost. I say theoretically because I have seen tree roots do enormous damage to man made objects in the tree’s quest for nourishment. In my Long Island home, our oak tree actually girdled the sewer pipe that ran from the house to the street sewer line and managed to crack it. It wanted the water and the lovely sewage running from the house. We discovered the problem when the sewage backed up into the basement. The plumber who cleared the line pulled out chunks of tree from the pipe. I’ve never seen anything quite like that.

So if an oak tree can tap into a metal pipe underground over the course of 20 years or more, I’m sure a pine tree can find a way to crack cement to dip into the treats above. We shall see. In the meantime, I’ve promised our local opossum, nicknamed possum Pete, that I will keep putting out the banana peels, pineapple cores, avocado shells and mango peels for him. He loves pineapple and will pull out any and all bits I leave in the compost pile, leaving a trail of gnawed fruit in his wake. We’ve seen possums nibbling at bananas, too. The new compost pile may be hard for him to access, and put him in danger of the curious cats, so I promised him I will leave his treats in the woods. 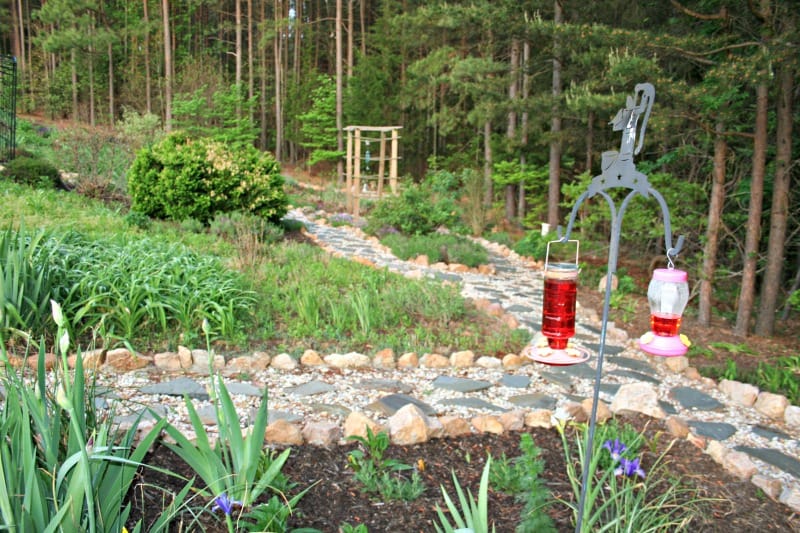 Now you know why I need all that mulch! The perennial garden yesterday, April 2016.

Life on the farm is never dull. I thought that when I moved from the New York City area to tiny Prospect, Virginia, that I would be bored. I loved people-watching in Manhattan and the colorful, interesting folks I met each day.

Here on my farm in the Piedmont area of Virginia, I don’t make the acquaintance of such people on a typical basis. I do meet all sorts of wildlife, like my phoebe friend and possum Pete, who each have their stories to tell. Even the pine trees take on a personality of their own when you think about it. The pace of life may be slower, but the stories are the same.