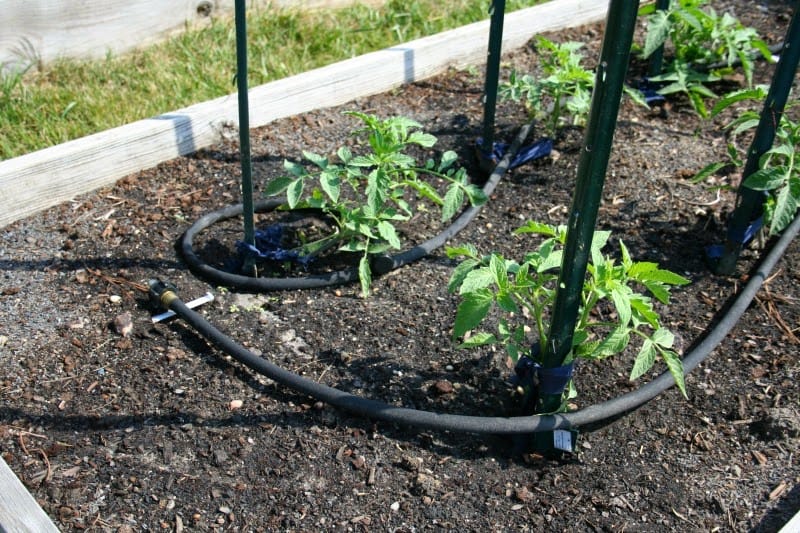 All About Soaker Hoses

We chose to use soaker hoses in the raised bed vegetable garden this year, and so far we think it’s going to pay off in several ways. What’s a soaker hose? It’s a special type of garden hoses that has tiny holes all along the length. You place the hose near the roots of the plant and allow water to drip into the ground rather than spray on top of the plant, as you would if you were using your garden hose or a sprinkler to water the plants. Water is directed to the ground, where it can soak into the soil near the roots and do the most good. Plants absorb water from the roots.

Many people stand at the edge of their garden with a hose, shooting streams of water at the leaves of their plants. Unfortunately, that does little good, since the plants can’t drink through their leaves. They need moisture in the soil for their water source.

Securing Soaker Hoses to the Ground

We used U-shaped pins to anchor the soaker hose in place. At first we used landscape fabric pins, but they were expensive, and if the hose jerked from a bit of air in the line, it tended to pull the pins right out of the soil.  I came up with the bright idea of using wireframe coat hangers instead. We snip off the curve that hangs over the clothes rod and bend them into U-shaped pins with longer arms.  These work great to hold the soaker hose in place. You push the ends of the pins into the ground, allowing the curve of the U to push the hose into place.

I like the drip irrigation system around the vegetable plants for many reasons. We’re on well water, and we don’t want to waste the resources or the well pump.  The soaker hose seems to use less water. What it does use, it aims directly where the plant needs it, and leaves the rest of the soil dry.  Hopefully that will discourage some of the weeds from taking root, too!

We noticed that the soil stayed moist near the hose area for a long time after we turned off the water.  We realized that the hose continued to drop for a while after the water source was shut off, another benefit.

So far, our plants seem to like the soaker hose. Time will tell if our investment pays off.  We have growing in the vegetable garden the following:

And that’s what we have growing so far.  I harvested two strawberries, four radishes, and I feel triumphant.