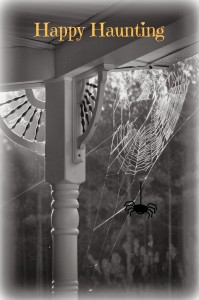 Did you go trick-or-treating as a child? Here in rural Virginia, the children don’t go house-to-house trick or treating like we did in the urban and suburban areas of New York where I grew up, where the houses were so close you could peer into the neighbor’s kitchen from your living room, when you could easily gather bags of candy by just walking around the block. Instead, children in my new area travel to town, where many of the shops offer trick-or-treating, or to parties, like the one my church’s Knights of Columbus group hosts for the children. It’s a fun, safe way to enjoy a harmless holiday.

But when we were kids…trick-or-treating was like the High Holy Day of Childhood. It started weeks before the Big Day when the local stores began stocking the black and orange crepe paper streamers, the cardboard ghosts and monsters, the makeup kits to transform yourself into a zombie or monster or whatever. Then your mom bought the candy, but to touch the candy before Halloween? Death! Destruction! Endless shame! Even Dad couldn’t open the candy before the big day!

I’ve heard that children today can wear their costumes to school, but we would never have done that. Yes, I went to parochial school where strict rules about uniforms were enforced. The public school children also had to wait “back in the day” until school let out before they raced home to change into their costumes.

Plans would be made to gather with friends. In preschool, kindergarten, first and second grade, I had to trick-or-treat with my older sister. How she hated having me tag along! Too slow, too tired to carry on with more houses. She wanted to trick-or-treat at night, which was forbidden in my family; too many bad things went on at night, like egging, flour sacks and shaving cream, and older kids stealing the little one’s candy. As soon as the school bus let us off, we changed into our costumes and off we went.

My sister carried a pillow case to gather her candy. I, on the other hand, always carried my beloved plastic pumpkin. I still have that pumpkin. Can you believe it? I am in my middle 40s, and I have a plastic Halloween pumpkin my mother bought for me when I was around 4 years old. I love that thing. It has been used and abused, loved and scuffed by myself and my niece Melissa (as a bath toy when she was around 4) until the handle broke and most of the paint wore off.  It holds a place of honor on my china cabinet and I hug it each fall when I take it out of its cardboard box in the cellar. It holds a respectable amount of Halloween candy, may I add.

We would begin trick-or-treating at my next door neighbor, Mr. Hoffman.  He always had old-fashioned paper sacks like my mother handed out; a lollipop in the middle, five pennies, a hard candy or a bit of Smarties, maybe something else. Not much, but enough.   Then we would move up and down Beverly Avenue, to Marshall, Orchid and Revere.  If we felt up to it, we might go through the side streets like Hill and Adams before turning home again.

When I got older, I’d meet my friends for trick-or-treating. My best friend Sue lived on Adams Street, and so I’d walk to her house and we would start on Adams. Earl Court had good candy, as did many of the houses on Tulip Avenue.

One year, we rang the doorbell for a large, fancy modern house. We could see the family through the transom window next to the door. They were just sitting around the kitchen table, talking, and ignoring the bell. Ignoring the bell on Halloween! Blasphemy!  We, the outraged children gathered on the stoop, banged on the door and shouted, but they never budged! Now I know better. The family may have been Witnesses (Jehovah’s Witnesses) or another faith who do not celebrate Halloween and who do not answer the door to give out candy. At that age, however, and living in a town that was about 90% Roman Catholic, 5% Protestant Christian and maybe 3% Jewish and 2% Muslim or Hindu, what did I know? My friends were Catholic. Not only did we celebrate Halloween, we gloried in it.  After all, we had the distinction of having All Saint’s Day, the very next day, off from school. We could stay up as late as we wanted!

When I held my Halloween parties starting in second or third grade, these kept us busy through the evening hours. When I was younger, however, we would sit on the front stoop and light our Jack O’Lanterns.  We had the BEST Jack O’Lanterns.  We always had one huge one that was a family effort, and smaller ones for the younger kids. My mother saved old candle stubs and we lit them for a great spooky effect. We would set them up along the front stairs and sit with them to make sure nobody ruined them.

My mother also saved the decorations from a box of Halloween cupcakes she had bought many, many years ago. A green witch that was really spooky looking, a skull, a ghost and a vampire on a toothpick might not seem like much, but every year we looked forward to pulling out the shoe box that held these treasures and adding them to cupcakes, homemade or store bought.

Those days are long past. My sister Ann, who also loves Halloween, took the jointed cardboard cat figure and the cardboard pumpkins, the toothpicks from the old shoebox, and the memories of those days with her. Now she puts on quite a show, complete with faux tombstones and cobwebs, at her New Jersey home.

As for me, I have the old “Pumpkin Ghost” my dad bought after he retired. My dad had a fondness for mechanical toys and especially holiday decorations. After he retired, and when he felt more secure in his financial life, he indulged these fancies by buying a mechanical Santa Claus, complete with lit electric candle in his hand, who waved the candle about cheerfully once plugged in. He also bought the Pumpkin Ghost.  The Pumpkin Ghost was a great favorite among the youngsters in the neighborhood before we moved. It’s a foam rubber pumpkin with a Jack O’Lantern face on it.  It has a battery inside, and sense vibrations. When the vibration is strong enough – voices, sneezes, or now in my house, Shadow barking – it activates the ghost.  The pumpkins wheezes, groans, and starts making ghost noises. “Whooo…..whoooo!”  The top rises up and a ghost slowly glides out of the top while a green light flashes on and off. It’s wonderful. I love it.  My dad used to set it up on the front porch on a folding table with a note to touch the pumpkin. We would sit in the living room and peek through the curtains together until the kids touched the pumpkin. Then we would laugh while they squealed with delight at the Pumpkin Ghost.

The Pumpkin Ghost has pride of place on my dining room table. Today he emerges and makes his ghastly noises when Shadow barks at the UPS delivery man or when I sneeze in the entrance hallway (it echoes and I am a LOUD sneezer).  The cats are terrified of it and give it a wide berth, which of course makes us egg Shadow on so she barks when the cats are near it.

My beloved plastic pumpkin, the one that has accompanied me through four decades of life and several homes, grins crazily down at me from atop the china cabinet.

On my sideboard are several other decorations. Ceramic apples and gourds I bought in Virginia. A ceramic pumpkin and black cat, both acquired at garage sales in New York. And a fall centerpiece my dad made when he went on his holiday binge at Frank’s Nursery and Crafts the year he bought the pumpkin ghost. 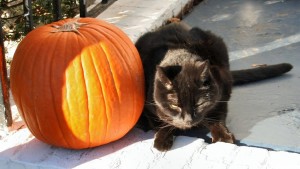 Today’s pictures: Top is a photo by me with added embellishments on the computer. Bottom photo is of my long-deceased black cat and a pumpkin.