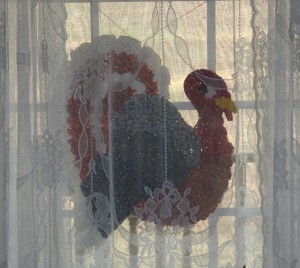 In all seriousness, like most of the objects in my house, there’s a story behind Tom Turkey.

My mother decorated for Halloween (a few cardboard cutouts and some Indian corn). The Indian corn stayed up on the front door knocker until the first Sunday of Advent. Then it was replaced by a plastic holly wreath with a big fake velvet bow. That came down on New Year’s Day and that was it — done.

Of course, I wanted more. Kids always do. It was always a wonderful moment when I would round the corner on Revere Drive to my street and see the first signs of Halloween on the front door, or the velveteen candy cane hanging in the dining room window. Then I knew for sure that happiness was inside; my mom had decorated for the holidays when I was at school!

My parents had a tradition that on Sundays, we did something together as a family.  We’d go to Mass at 10 a.m., then stop at Georgette’s Bakery for cinnamon raisin bread or a chocolate cake for dinner.  After a big dinner at 1 p.m. of a roast turkey, beef, chicken or ham, we’d head out.  In nice weather, we would go the duck pond and throw bread to the ducks. My sister and I would play on the swings.  Sometimes in the fall my dad would take us on drives. We would drive to the North Shore of Long Island to see the fall foliage and buy freshly picked apples and freshly made cider at the Jericho Cider Mill.  We would go to Planting Fields Arboretum in February to see the camellias in the greenhouse, and Old Westbury Gardens in the summer to gallop over the lush lawns while my parents toured the gardens.  But my favorite Sundays were the ones where went to the garden centers: Garden World, and Gardener’s Village.

Gardener’s Village was my favorite because it had a pet department, and in the pet department was Pepper. Pepper was an ancient red parrot with scarlet plumes and thick, hoary talons.  He had a massive old-fashioned iron bird cage in the center of the pet department where like the king he was, he reigned supreme over all.  I was one of many children who crowded around the railing around Pepper’s cage, waiting until he did something interesting, like poop, or use his beak to open peanut shells. Pepper talked, and getting him to say “Hello” back to you was something else.

In the back of the store were the greenhouses, lush hothouses filled with mossy, slick paved walkways and wooden benches filled with house plants.  My dad would find something interesting to buy; a cactus, a pothos, a new Christmas cactus.  On one November Sunday, feeling bored and out of sorts, I wandered over to a large cardboard box filled with 75 cent plastic decorations. Do you have these decorations or did you have them when you were a kid? They’re made from chunks or strips of plastic in different colors that melt together to make a sort of mosaic. In the heat of a sunny window, the gray plastic smell shimmers in waves off of these things. High class, they are not.

But I had to have the turkey. Look at the colors! My fingers danced over the rough surface, my eyes lit up at the blend of russets, reds, grays and blues that formed Tom Turkey’s feathers. And he had that goofy smile. With much begging and pleading, my mom reluctantly agreed to buy Tom Turkey.  A wire hung the new decoration from the door knocker.  The old mouse-eaten Indian corn was finally committed to its maker, and plastic Tom Turkey hung in its place.

Tom Turkey had feet once. Big, yellow feet. For some reason, when I was in kindergarten, I decided that bending the feet back and forth was fun. On warm days, the heavy front door stood open so that sunlight and breezes could flow through the glass and screen storm door, so if I stood on tip-toe, I could reach Tom Turkey. Wiggle, wiggle, bend, bend.  Suddenly, the feet and legs snapped off.  That’s how I learned that if you don’t have scissors, you can cut some materials by bending it repeatedly back and forth. My mother was annoyed but I didn’t mind. Neither, it seemed, did Tom Turkey.

Years have gone by and I am no longer in kindergarten, although you wouldn’t know that by my love of silly holiday decorations. And there, hanging proudly in my dining room in Virginia, is Tom Turkey. He has traveled from my childhood home to my newlywed apartment, from apartment to my first house.  My husband had to replace the wire with string, and we had to rig up another method to hang him from the windows, but that’s okay with him. As I mentioned before, Tom Turkey is the forgiving sort.

Next week is Thanksgiving, and many stores will be open for the first time not on Black Friday, but on Thanksgiving. Normally I don’t care what retailers do, but this bothers me for many reasons.  Thanksgiving has always been one of my favorite holidays because growing up in the New York City area, it was one holiday EVERYONE shared — Jews, Christians, Muslims, Hindus. If you were American, or a wanna be American, you celebrated Thanksgiving.  Some families might have a turkey, some a lasagna and others a bit of curry, but we all gave thanks for what we HAD. More importantly, it was a day of family.  Are we so fragmented now that nobody cares about gathering with family? Are we so focused on the next material object to possess that we forget to give thanks for what we have today?  I am not one to protest but I do protest stores open on Thanksgiving and the evil that is Black Friday crowds where people push and shove one another, trampling their neighbor to save $5 on a TV set or whatever.

This Thanksgiving, do me a favor. Gather with family, friends or neighbors. Hold hands and give thanks. Eat of the plenty that you have. Rest. Relax.

Tom Turkey would want it that way.