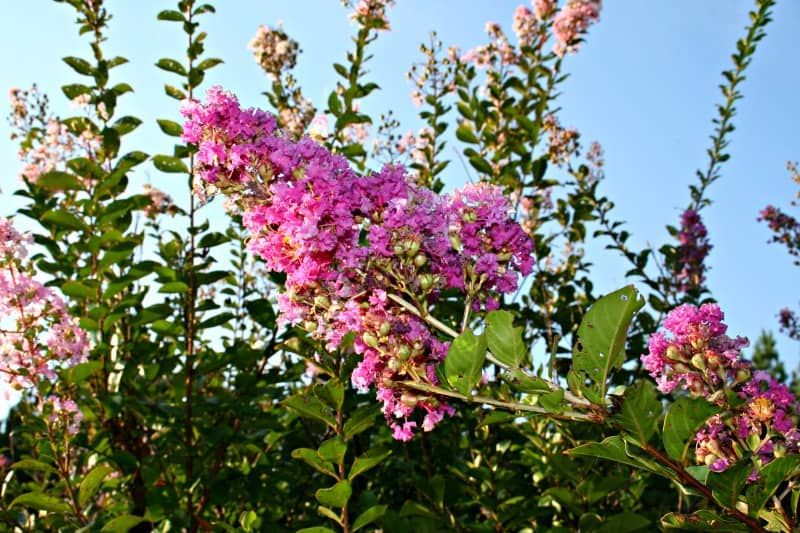 Despite the continuing drought, and the toll it’s taking on the flowers here, the crape myrtle remains lovely. I thought a nice, cheerful picture of the fall garden, showing the pretty crape myrtle blooms, would be a nice way to start off this update.

After a spring filled with abundant rains, the heat caught up to the garden…and then the drought. August saw very little rainfall, and it’s September 8th, and we’ve had barely a drizzle. The odd thing is that many of the plants have succumbed to rusts, molds, and other diseases caused by moisture. This seems to have affected flowers like my beloved zinnias the most. I think it’s a combination of high humidity, heat stress, and drought stress. You’ve got two major stresses on the plants along with conditions ripe for disease. It’s sad, but a reality of gardening.

We had one break in the oppressive heat, and I took advantage of it to do some weeding and mulching last weekend. I joke that at least my rock looks nice! 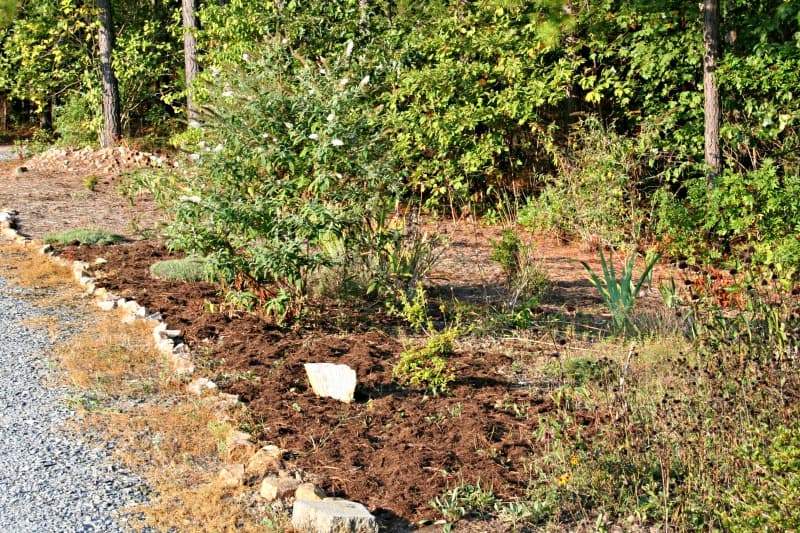 At least my rock looks nice! Newly weeded area with a big chunk of quartz we found in the woods. You can really see the toll the drought has taken on the garden.

The mulch appears darker than the surrounding soil and previously mulched areas for two reasons. First, it is moist. The mulch we had delivered from the garden center in the spring is still in the shaded spot in the woods where the delivery truck dumped it. It has retained its moisture, and it also retains the moisture from the morning dew (when we have dew, that is.)

Another reason it is so dark is that it hasn’t been bleached by the harsh Virginia summer sunlight. The perennial garden is in full sunshine daily, and the mulch tends to bleach to a light brown as the summer progresses. We were so busy this spring building the new compost pile that I didn’t have time to mulch the flower garden before the hot weather set in. The heat is so bad that we generally don’t do much heavy garden work until the temperatures drop around this time of year. 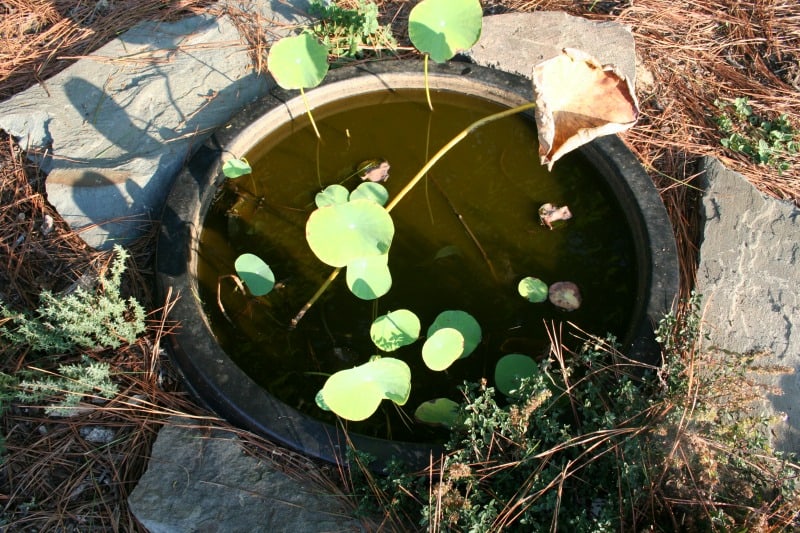 The pond is still a lot of fun, and although the flowers bloomed only once, I enjoy the activities of my two goldfish. Their names are Snack and Appetizer. The cats named them. 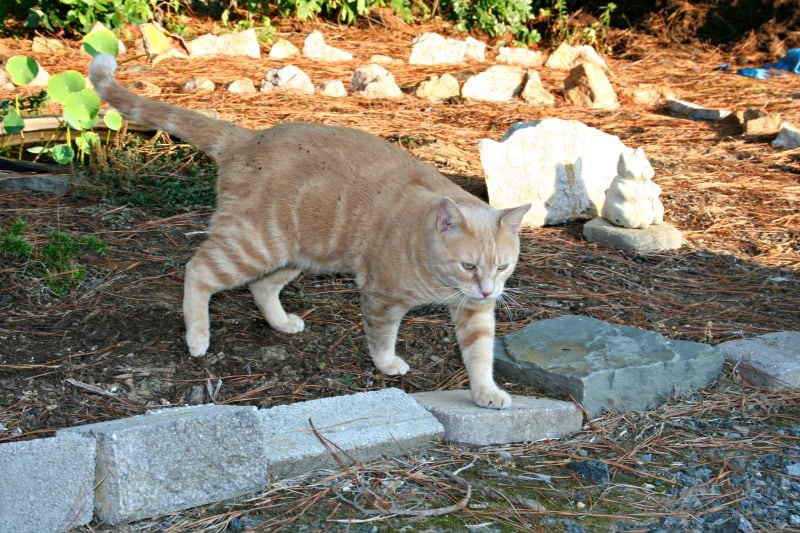 Rocky enjoys time near the pond.

I planted creeping thyme and oregano around the rim, and these herbs seem to thrive in the area, which is great. The thyme overhangs the pond and provides a little bit of shade for the fish. They seem to stay in the shady area a lot, but I was outside early this morning refilling the hummingbird feeders, and they were visibly leaping out of the water to catch insects. I loved watching them! 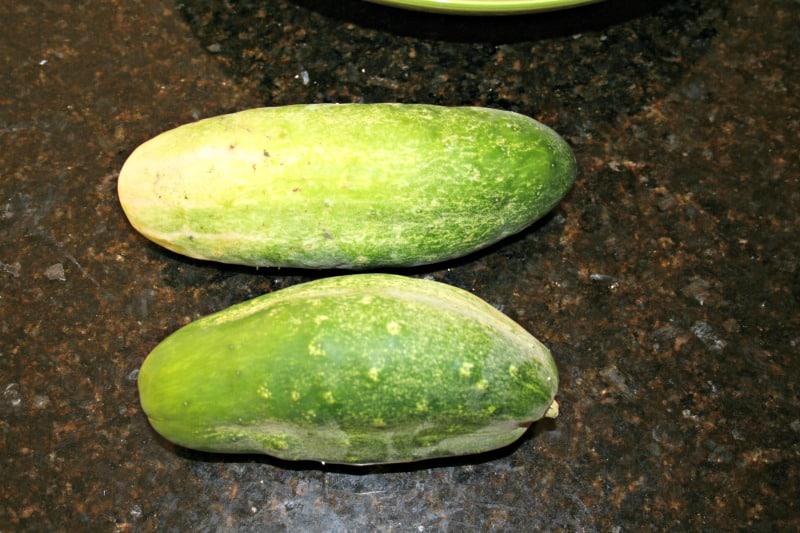 Despite the drought, the insects, and the crows attacking everything, there are small successes to be celebrated. These are the first two garden cucumbers I’ve harvested since 2010! I usually plant cucumbers in May or June, and then they succumb to a bacterial wilt transmitted by cucumber beetles. This year, I didn’t plant the seeds until August. I replaced the garden lettuce with cucumber seeds and planted them very near the water faucet so that they would get plenty of water, and it wouldn’t be hard for me to let the faucet drip a little after watering. The vines have started to show some signs of disease but the hardiness of the plants is surprising. So far, two very fat, healthy cucumbers are harvested. Looks like I have lunch ready…

So while drought, bugs, birds and deer have conspired to ruin everything from my tomato harvest to the few apples on the trees, I feel like it’s all a temporary setback. It’s a good reminder to stay humble. My garden was featured this summer in Virginia Gardener magazine, with photos taken in the spring and last summer. This summer? My garden should be in weed-and-browned drought annual magazine, if such a thing exists. It’s all part of being a gardener. You take the good with the bad years, the rain with the drought, and hope for the best.