“Come see this wasp nest with tube,” my husband called to me. I was sitting in the living room working on a new counted cross stitch project. Reluctantly, I set it aside, slipped my feet inside a pair of gardening boots, and met him at the crabapple tree, expecting to see some simple creature’s nest.

I crept closer. Hanging from the branches of my favorite crabapple tree at head-height was this: 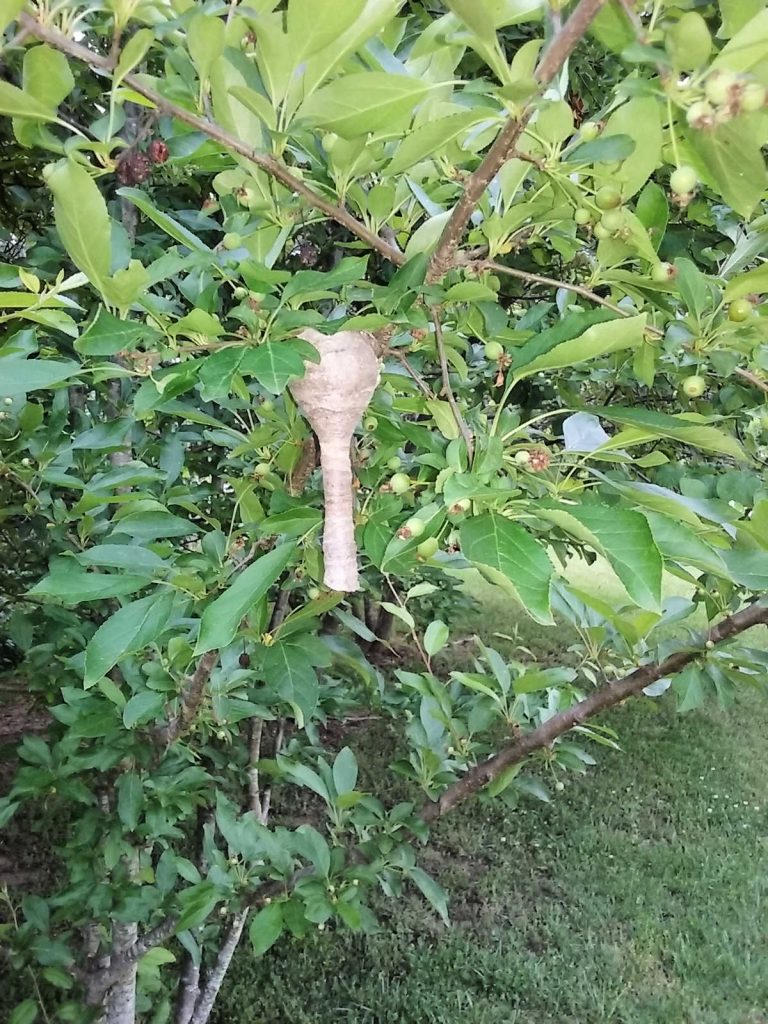 The Wasp Nest with Tube – a Baldfaced Hornet Nest

“It looks like a water tower,” my husband said.

We had a tough time identifying the nest until a friend on Facebook found pictures of the early stages of the baldfaced hornet nest, Dolichovespula maculata.

What Is the Baldfaced Hornet and Is It Dangerous?

The reason it was hard to figure out what kind of nest it was is that the “water tower” shape my husband so eloquently described refers to the early stages of the baldfaced hornet nest. He’d managed to find it before the wasps had more than a few days to build their elaborate construction.

The baldfaced hornet is a large stinging insect in the same family as the yellow jacket. It actually eats yellow jackets, which is probably why it chose to build its nest where it did. Nests of yellow jackets swarm each fall and I get stung at least once or twice in the vegetable garden each autumn.

The early stages of the nest do indeed look like a paper wasp nest with tube.  We watched one of the hornets enter and exit through the bottom-facing tube.

The Lifecycle of the Baldface Hornet

According to the Department of Entomology at Penn State University, the queen overwinters in the bark, under rocks or similar places. She emerges in the spring and constructs the original nest by chewing cellulose from rotted wood and mixes it with her saliva. This is how she constructed this masterpiece.

The wasp nest with tube is actually the early stages of the baldfaced hornet nest.

She creates a few brood cells in the ball part of the nest and deposits eggs there. 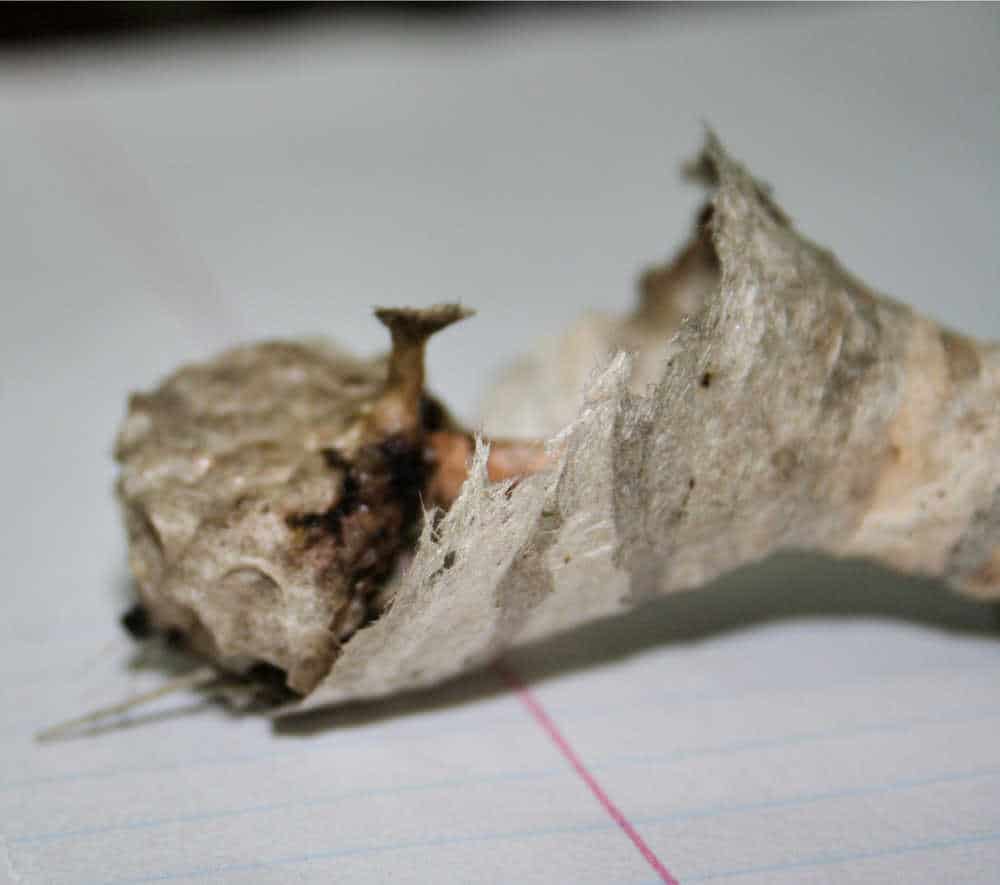 Tube and egg chamber of a baldfaced hornet nest. Note the paper; it’s made from cellulose and saliva from the queen.

You can see the brood cells and a larva hatching here. 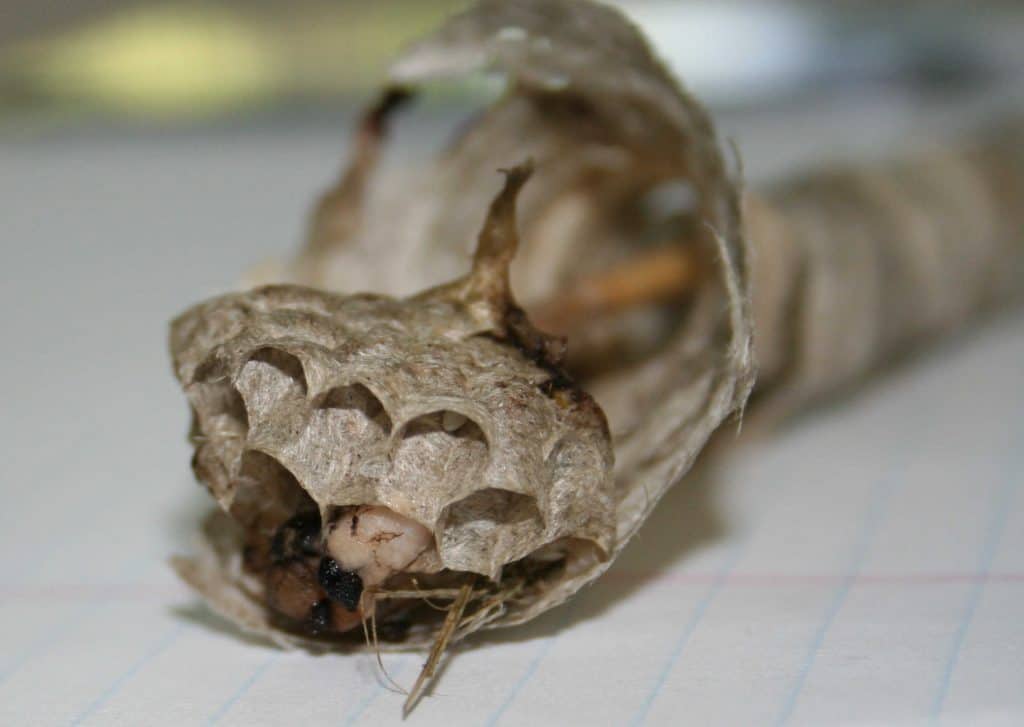 We noticed one aggressive hornet flying around the nest, attempting to protect it. I assume that was one of the first to hatch; I don’t know if the queens fly.

As the colony continues, there may be upwards of 300 or more hornets living, working, and guarding the nest. The paper-like nest grows to the size of a football.

Take the Nest Down (or Call an Exterminator)

My husband took the nest down himself and although dislike disturbing any wildlife, after learning more about this unique insect species, I am glad he did. First, the hornets chose to build their nest right next to the house. This is a part of my yard where the cats often lounge and where I like to walk. It’s also exactly en route to the spigot for the garden hose and about fifteen feet from my back deck where we like to eat out or relax. Talk about a ruined summer…and bad neighbors. A hornet nest next to your patio isn’t conducive to a relaxing meal, that’s for sure.

Lastly, the hornet nest was at head-height. My husband rides the lawn tractor and it would have hit him exactly in the head or brushed past his head, while he mowed under the trees. I can’t imagine what might have happened if he hadn’t spotted it and dealt with it when he did.

Although the baldfaced hornet reduces the local yellow jacket count and may be a pollinator, they need to go elsewhere and not next to my house if they want to build a nest. With over 16 acres for them to choose from, they have plenty of other options here!

If you enjoyed this article, you may also like: