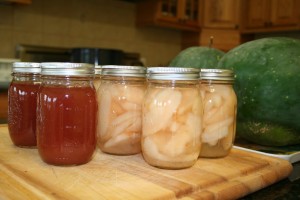 The rain storm predicted for the weekend fizzled out, with the clouds dumping all their rain somewhere over the Blue Ridge before heading here just to make the day gloomy. The garden sure needs the rain. I’m hoping that the next round of storms won’t give up before crossing those mountains this Wednesday!

But I put the day to good use. My neighbor and friend, Patty over at Shady Acres Farm in Prospect, gave me several big bags of pears from her trees. They are Kieffer pears, an old-fashioned variety that the Arbor Day Society website tells me are very resistant to fire blight and other diseases and great for the south. Now I’m eying the orchard and wondering if I should have planted Kieffers instead of Bartletts. The taste to me is a cross between a good apple and a pear, with the flesh firm and crisp like an apple even when they’re ripe.

I got out Hubby’s grandmother’s canning pot and my new Ball jars and canning equipment set and I was off and running! I’m no longer nervous about canning and Patty emailed me a recipe that was super easy. I just peeled, cored and sliced up the pears, poured a sweet syrup over them, and then hot water bath-canner for 20 minutes.

But I did feel adventurous! The reddish looking jars are pear butter. I got out my Ball Preserving the Harvest cookbook and found a recipe for peach butter that could be adapted to pears. It took longer than I expected and made a mess in the kitchen, but when I tasted it – wow! I like peach, pear and apple butter, but this one was just scrumptious. Orange juice, lemon juice and nutmeg gave it layers of flavor that was gorgeous. The red color from the orange juice and nutmeg makes it glow like rubies in the jars. I cleaned some of grandma’s ancient Ball jars, the kind with the weird wire closure, in the hopes that I had some left over and could put it in there and refrigerate it and enjoy it this week, but I had just enough for the last two ball jars. I’ve got boxes of the weird jars from his great grandmother and grandmother and we don’t want to use them for canning – some have new seals, but they are so, so old I don’t want to chance it. I keep hoping for a craft project or something to use them up. I did take a few pretty ones to use to put my dried Calendula and lavender blossoms in them; nothing like storing herbs and having them so pretty you put them out on a shelf to admire!

What a great feeling to put all those jars of pears and the pear butter into the pantry next to the peppers. I rearranged the contents of the freezer too, and it gave me a real feeling of accomplishment to see bags and bags of sweet corn, peppers, green beans, chard, spinach and more vegetables that I froze over the summer.

The pear butter managed to splatter a lot around the kitchen, so the floor was sticky. I had to vacuum the dog hair up from around the house before the hair balls attacked, so I next attended the kitchen. I really dislike cleaning. I always joke that if we win the lottery, the first thing I am going to do is hire a maid whose sole job will be to clean my house every day. I love a sparkling clean house, top to bottom, with everything neatly put away but I sure don’t like to clean!

As I scrubbed the kitchen down yesterday though, I had to admit; there’s something really warm and fuzzy feeling about doing household chores. The canning process really makes me feel like I’ve accomplished something. And getting the stove gleaming made me feel good, too.

I never considered myself a domestic person and I’m still not. On Friday, my neighbor and friend Helen and her daughters Meredith and Michelle and I met up for lunch. They are the epitome of domesticity! Helen just radiates peace and she and her daughters love to cook and sew and do all that sort of stuff. They are all so happy to do the “girl stuff”. It seems natural to them. I sometimes share that I never really learned to do any of it; but the truth is, even if my mom had been well, and I’d been surrounded by women cooking, sewing and enjoying all of that, I’m not sure how much I would have loved it. My Barbie dolls carried briefcases and were going to be president of the world; they were CEO’s, not mothers, and if they were mothers, they had maids. Sigh. I think I was made a wee bit differently than most people….

Today’s photo is my canning project from Saturday. And yes, those watermelons are from the garden – we brought in the last of them a while ago, but can’t eat them fast enough! I’ll probably be outside later today cleaning up more in the vegetable garden after church.