Fall vegetables are the best! The fall garden offers an abundance of fresh produce. 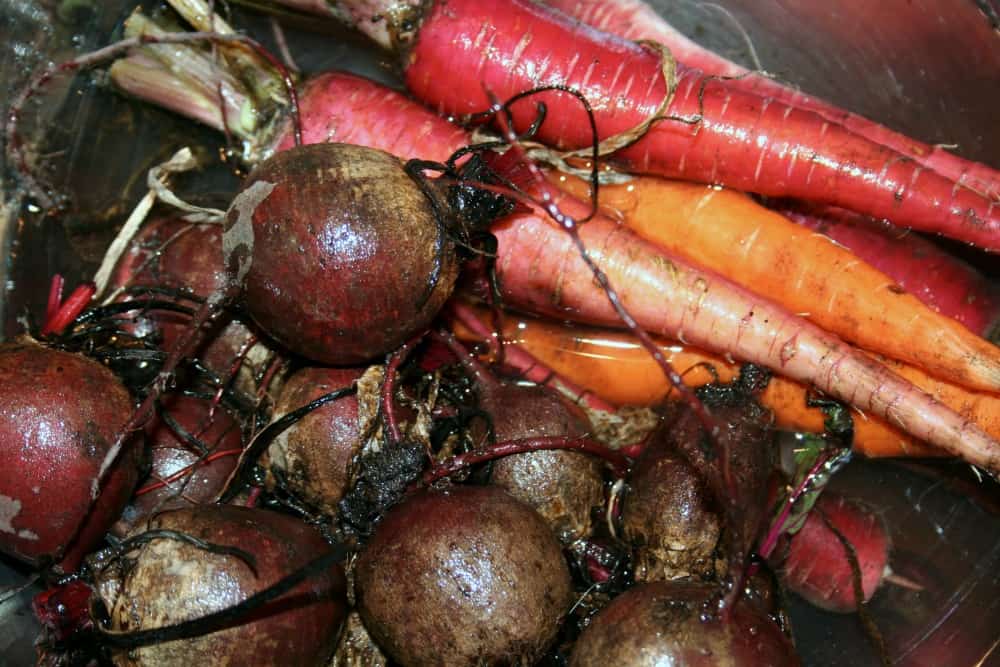 Some people think that summer is the best time for the vegetable garden, but I’d have to say that it’s fall.  Not only does the summer harvest continue, but now all the fall crops produce in abundance.

Just this week I harvested:

These are the vegetables that I am harvesting in abundance, but there are more out there. I have acorn and butternut squash on the vine. I found the trick to outwitting those awful beetles – plant the seeds in August!  Apparently it’s just past their mating season so I avoided all the eggs and the swarms of newly hatched beetles that decimated the cucumbers, zucchini and summer squash.  We counted 20 butternut squash on the vine and just two acorn squash, but I’m hopeful we may get a few more of the acorn squash.

I planted cabbage, broccoli, and cauliflower in what I *thought* was the empty potato bed. Wrong. I must have left a whole bunch of little seed potatoes around in the soil, because now I have a gigantic mess.  I have potato plants springing up everywhere, with a giant cabbage in one corner and broccoli leaning against potatoes. I have no idea how I’m going to get the potatoes out, but I’ll deal with that closer to Thanksgiving. The good thing about raised beds is that the soil stays workable longer. I can get in there and dig even after the frosts. So I can keep gardening until Thanksgiving or so.

The big yellow and black spiders are everywhere this year, a sign that the garden flourishes along its own terms, with spiders and birds keeping the insect population in check. The mole is back – this time, Pierre the cat found it near the shed. We caught Pierre digging fast and furiously in a hole and saw the mole scamper into the woods with Pierre hot on his trail. He lost the creature within a few feet but I had one excited kitty on my hands. I’ve had to watch Pierre very carefully every time he goes out into the garden. Last week, he managed to find a snake…which he brought up to the house, of course.  We heard a commotion on the back deck and went to the window to see Pierre under the picnic table playing with something.  I said to my husband, “Oh, how cute, he has a lizard.” Oops. Not quite. A rather good-sized snake was trying to escape his clutches.  I yelled for John and handed him a shovel, which he used to scoop and fling the snake into the side garden while I quickly snatched up Pierre and moved him back into the house.  He mewed in protest, the ungrateful brute, as if to say, “Hey! Daddy stole my snake!”

If you didn’t get a chance to plant vegetables this fall, now’s the time to head over to your local farmer’s market or a garden center and enjoy a little taste of fall. Do it now, before Halloween arrives with all that flurry of stuff to do.  Enjoy!