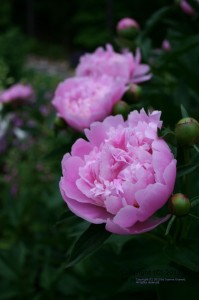 Here in Virginia, it’s peony season, and masses of these beautiful flowers bloom near the foundation of old abandoned houses, formal gardens, and suburban dwellings. A popular Asian symbol and a symbol for the country of China, the peony is an ancient flower that hails from Asia, Southern Europe and Western America. Although not officially named until the 1830s, the peony flower was beloved in China for decades. In fact, the city of Luoyang prides itself on its peonies and holds annual flower competitions. The name derives from Paeon, a student of the Greek god Asclepius. Asclepius became jealous of Paeon’s skills, but Zeus saved the young man by turning him into the peony flower. Or so it is said…

Peonies are hardy herbaceous perennials that grow in either a tree form, aptly called a tree peony, and a shrub form, which is just called a peony. All the photos you see in today’s article were taken by me in my garden of my four shrub-form peonies. They are all five years old. In just a few short years, with proper care, peonies produce abundant blooms. Plants can live for decades. My sister has four “Festiva Maxima” peonies, descendants from plants my mother started around 1960. They are still going strong, producing abundant, beautiful blossoms annually. There are 25-40 species of peonies, with flowers ranging from white to dark fuschia; there are also yellow, pink, and bicolored varieties. 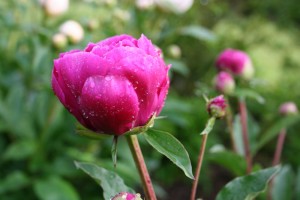 Growing peonies is fairly straightforward. Peonies need full sunlight and cold winter temperatures to produce flowers. They need a hoop or stakes and twine to hold their heavy flower heads upright; even with hoops, as my peonies are staked with, the heavy rains can beat them to the ground. It won’t harm the plant, but it will spoil the look for a while.

One of the most fascinating things about peonies is that scientists are discovering an abundance of medicinal compounds in the humble spring flower. At last count, they’ve discovered 262 compounds in the plant, with  many exhibiting anti-tumor, anti-cancer, and cardiovascular system benefits. Perhaps someone intuited the health benefits of peonies when they named them after a pupil of the god of healing!

Whatever they are called, and whatever science discovers in the flower that can help mankind, peonies are beautiful, and my garden would be poorer without them. I look forward to the peony display each year as I look forward to the irises. If you have full sunlight and well drained soil, consider adding a peony to your garden. 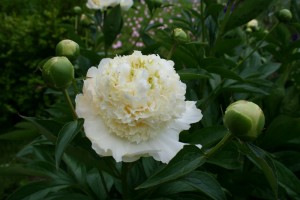