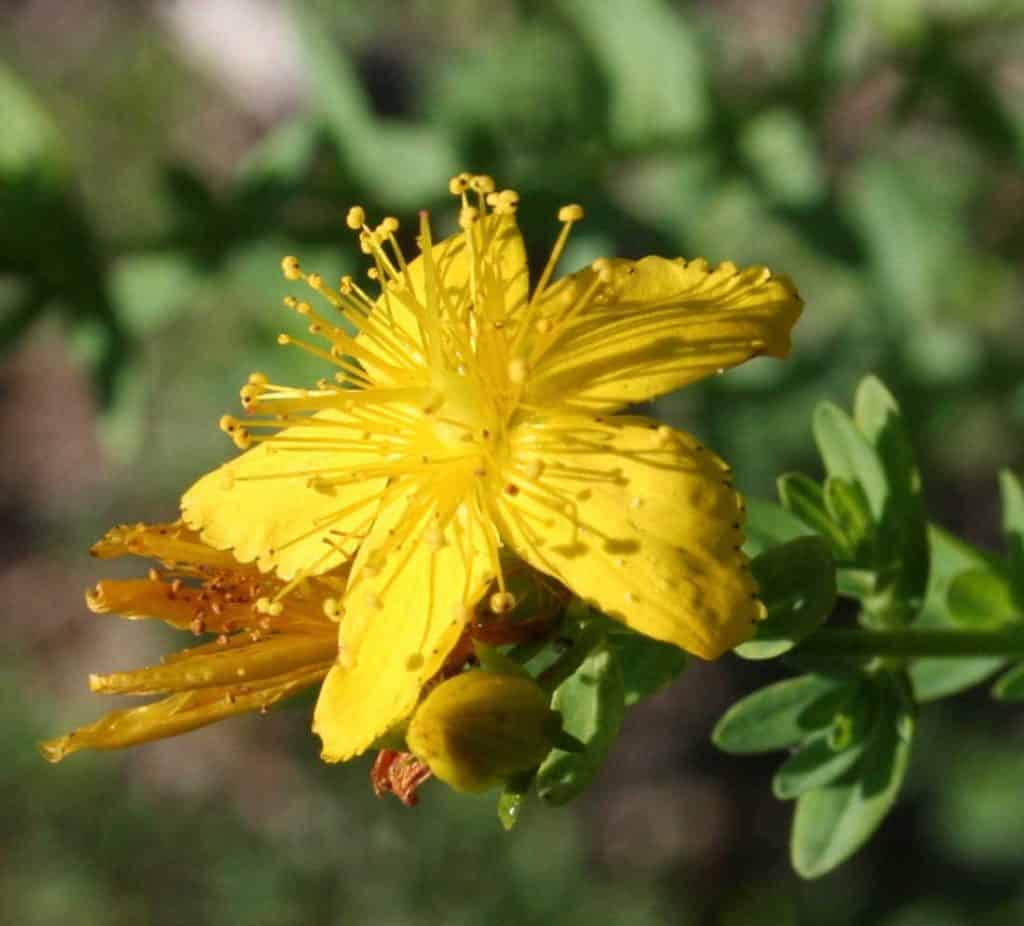 St. John’s Wort (Hypericum perforatum) is one of those “old” herbs that comes up in many herbal texts from years ago. The name itself gives you a clue of its use in antiquity. It’s named after the dates around which it blooms. In olden times, people marked the calendar by Catholic church feast days and saint days. St. John’s Day is June 24.  St. John’s Wort blooms prolifically around this time of year in most temperate climates.

My own St. John’s Wort plant began blooming very early this year, in May, but I’m pleased to say it’s kept blooming and today had new flowers and buds. Both the flowers and buds are used medicinally. Some herbalists prefer to use the buds and claim there are more of the active healing constituents in the buds. I use both when making St. John’s Wort oil and tinctures for my home herbal apothecary.

St. John’s Wort plants are surprisingly easy to grow. I purchased seeds from Strictly Medicinal seeds and started them indoors. I transplanted the seedlings to the garden in early summer and watered them well for the first year. The plants are perennials and will return year after year. I had enough flowers and buds in the second year for the many St. John’s Wort uses I intend to try!

As I mentioned, St. John’s Wort received plenty of press about its use as a dietary supplement to treat depression and anxiety. Some find it works wonders but I have also spoken with two people for whom the supplements didn’t work. As with all herbal supplements, the potency of the tincture or pills matters, as does the interaction in the individual person and with other supplements. And of course, do not take St. John’s Wort if you are already taking medication without speaking with your doctor or pharmacist.

Studies indicate that St. John’s Wort can be used for depression, but what are these surprising St. John’s Wort uses I keep hinting at? Here are four that you probably didn’t know about!

Many Uses of St John’s Wort

It is said that St. John’s Wort’s anti-inflammatory properties have been known for over 2,000 years. St. John’s Wort oil, made from an infusion of flowers and buds in a carrier oil, rubbed onto minor cuts, burns, or skin irritations helps heal them.

You can make your own St. John’s Wort oil easily if you have access to fresh flowers and buds. Snip them early in the day, let them wilt a bit, then add them to a carrier oil such as high-quality olive oil. Gentle, constant heat, such as immersing the jar in water in a Crock Pot on low or placing it in the sun, infuses the constituents into the oil. The oil turns a lovely ruby red color when it is done.

Extracts of Hypericum contain hyperforin, a bio-active compound of St. John’s Wort. A study published in the International Journal of Cancer showed that hyperforin inhibits angiogenesis in vitro in bovine aortic endothelial cells and in vivo in the chorioallantoic membrane assay. In plain language, this means that in laboratory studies on cow cells, an extract of St. John’s Wort’s active constituent inhibited cell division. Cancer is a disease of rampant cell division. Further studies are needed of course before any definitive conclusions can be reached, but it’s a good start at providing another of the surprising St. John’s Wort uses!

Beyond all the headlines of S. John’s Wort uses and possible benefits, it’s a beautiful plant with pretty flowers that makes an attractive garden herb. Grow it for its cheerful yellow flowers or for its ability to attract and sustain bees and other pollinators. Grow it for its healing properties and make your own herbal oils. Whatever you do, grow it, for St. John’s Wort is both a beautiful and useful herb.